A herd of deer caused quite a bit of trouble for a man in Hagerstown, Maryland. Grab ...

A herd of deer caused quite a bit of trouble for a man in Hagerstown, Maryland.

A homeowner was surprised by a thunderous sound after several deer ran at full speed towards his garage door. The first deer appears to realize that the garage door is blocking its path at the last minute and attempts to stop. Instead, the deer smashed into the garage door, which created a cannon-like sound.

“It caused the air pressure to change enough that it popped open my kitchen door to the garage also. I walked out there and was quite confused. You can hear me say “wtf” at the end of the video,” the homeowner explained in a statement obtained by Whiskey Riff. 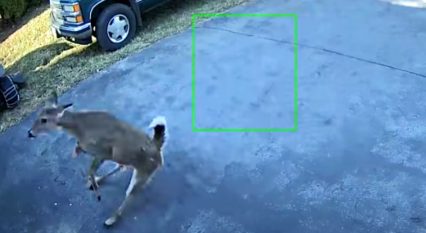 Several other deer scrambled to stop in the driveway, which resorted in a messy and hilarious security video. The deer scramble as if the drive is iced over; however, the temperature was a sunny 45 degrees.

After the deer scrambled away, the security footage appears to go back to normal, but according to the homeowner, the deer caused more trouble in the backyard. The man stated:

“As soon as I went out front I could see fur on the door. Then I walked around the corner and the gate to my back yard was mangled, off the hinges, and flat on the ground. I looked up and two of those stupid deer were in the back yard.” 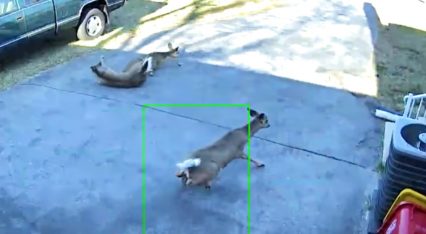 Watch the full video below!

Airplane Lands on a Deer... Does NOT End Well For The Deer