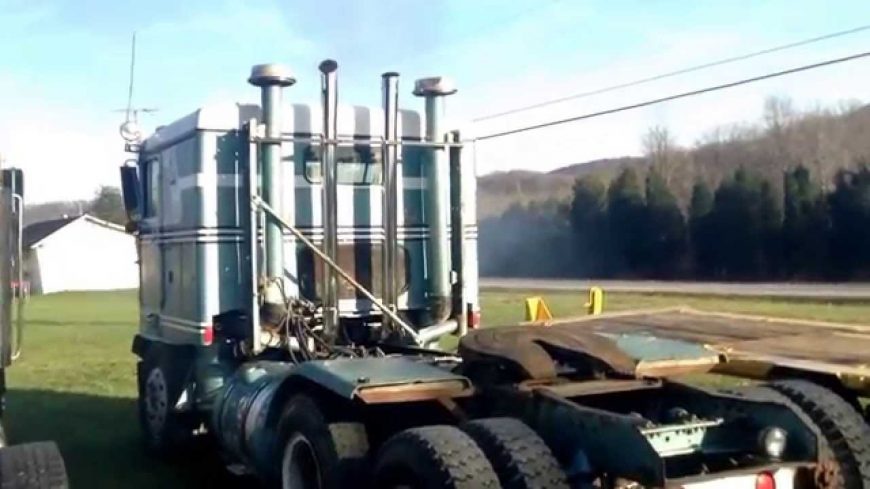 Cab-over-engine (COE) trucks, known simply as cabovers to most in the trucking industry, were once very common on our roadways pulling the same trailers we see the more common long-nose trucks pulling today. The evolving weight restriction laws forced the vast majority of COE’s off the roads for over-the-road use a couple of decades ago, but there are still a few around, many of them cleaned up and customized for truck show duty and occasional light use and many of them have just been parked and left to waste away.

The rig in this video looks to still be in pretty good shape, and when the engine finally fires up and rumbles to life, it sounds downright sinister. The powerplant is a Detroit Diesel 12V71, and for those out there who know their diesel designations, you know that’s a hoss of an engine. Checking in at an insane 14 liters, or 852 cubic inches of displacement, the 12V71 cranks out an awesome 450 horsepower and likely close to, if not over, 1,000 ft/lbs of torque.

With that kind of power on tap, this truck could easily haul any legal load in the US up the steepest of hill without losing so much as a single MPH if needed, and with the right transmission backing it could probably haul a full load across flat land well above 100 MPH without breaking a sweat, all the while sounds like something out of Armageddon (the biblical event, not the Bruce Willis movie of the same name).

Just sit back and crank up the speakers or headphones on your computer, phone or tablet and listen to the snarling powerplant as it warms up in the cold morning air. It’s awesome to see such a badass rig still up and running and sounding like such a beast so many years after it was built.