Our very own Jesse Kleiber from the BigKleib34 YouTube channel always manages to find ...

Our very own Jesse Kleiber from the BigKleib34 YouTube channel always manages to find the coolest rides while he’s out filming at the races. It seems no matter where he goes, Jesse stumbles upon some kind of crazy, unique ride that really stands out among the other cars, or in this cars trucks.

This Ford F100 looks cool, but as you’ll quickly find out, there’s way more going on here than looks. Lurking behind that sinister murdered-out exterior lies a snarling beast of a powerplant that rockets this truck down the quarter mile in very short order. So what exactly does it take to push a hefty old pickup to deep 10-second quarter mile times? In a word: TURBOS!

Not one. Not two. Three. Three S300 turbochargers feed the 12V Cummins with a ton of air. By the owners estimate, it should be cranking out around 1,000 horsepower and likely makes over twice that number on the torque graph. Once the setup is dialed in – because running 10.4’s in the quarter isn’t dialed in enough – he also has a little nitrous to add to the equation, but he’s hoping to dip into the 9’s before adding the giggle juice.

The engine itself is basically a stock Cummins 12V except for the cam and is fed by the turbos and an upgraded fuel system to keep everything nice and happy. The truck does have a Crown Victoria front end, which the owner says made the truck much easier to drive. Of course, that required some fab work, like custom motor mounts and probably some interesting routing of the plumbing for the turbo system as well.

As you can see in the video, the truck takes a few seconds to spool, but still manages to drive around the trucks in the other lane and take the win thanks to it’s insane quarter mile numbers.

Is This the Biggest Car Meet in the World? 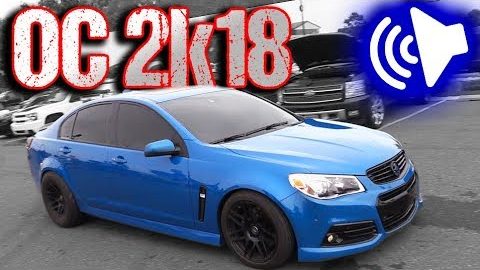