by Jose Corona | May 27, 2019
failfunnytrucktrucks

TruckIt seems with the advent of social media and sharing every detail of our lives ...

TruckIt seems with the advent of social media and sharing every detail of our lives with the world – not being judgmental, I certainly do it as well – everything has become a bigger deal than it used to be. Think about it, before Instagram, did everybody know what you had for breakfast, lunch, and dinner? Before Facebook, did everybody know what movie you were going to see, where you were going to see it, and with whom? Before Twitter, did anybody know what you thought about that one girl on that one show and how she did that one guy so wrong? Unless you called or texted everybody in your contact list, the answer to each of those is almost certainly “no”.

However, as we let the world into our lives each day, we have this innate tendency to make things look better than they are, right down to how we tell the world if we are having a boy or a girl. My sister recently had a gender reveal party, with a mix of pink and blue decorations and boy-or-girl themed games. The event was capped by a confetti popper reveal where all of the attendees popped their poppers on three to shower the guest of honor in pink confetti, revealing to the world that she will be blessed with a baby girl in a few weeks.

As you can see in the video below, some folks include their vehicles in their reveal, and occasionally that can lead to minor issues. It would seem Father-to-be Michael has prepared his diesel pickup to bellow blue or pink smoke upon ignition to reveal the gender, only when he parked the pickup, he left it in gear. As you can imagine, this is a recipe for disaster. When Michael reaches through the window and turns the key, the diesel roars to life, revealing twin plumes of blue smoke. However, before anyone can even react to the news that the baby is going to be a boy, the pickup lurches forward, dragging a panicked dad-to-be as it rumbles toward a nearby tree. With a sickening thud, the truck bangs into the trunk of the tree, slamming to a halt and sending Michael tumbling to the ground. Hopefully other than his pride, our future father wasn’t too badly hurt and he and his son can watch this video and laugh about the mishap together.

Baby Gender Reveal by Massive Burnout, is it a Boy or a Girl? 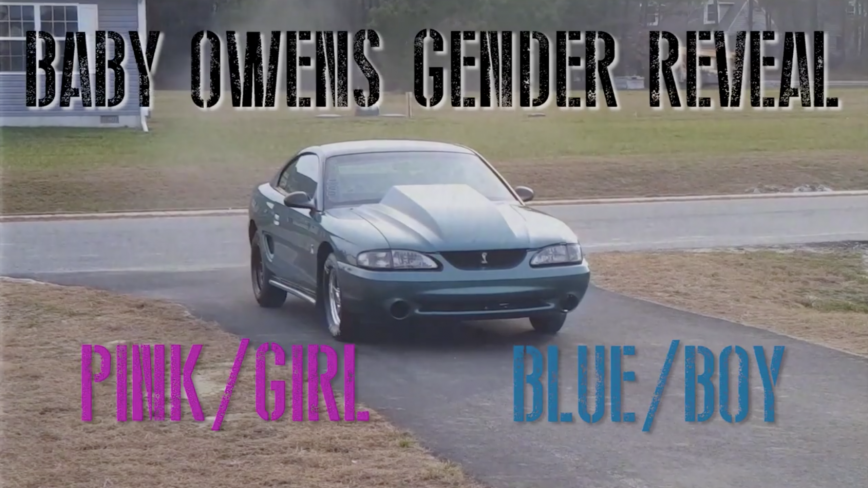