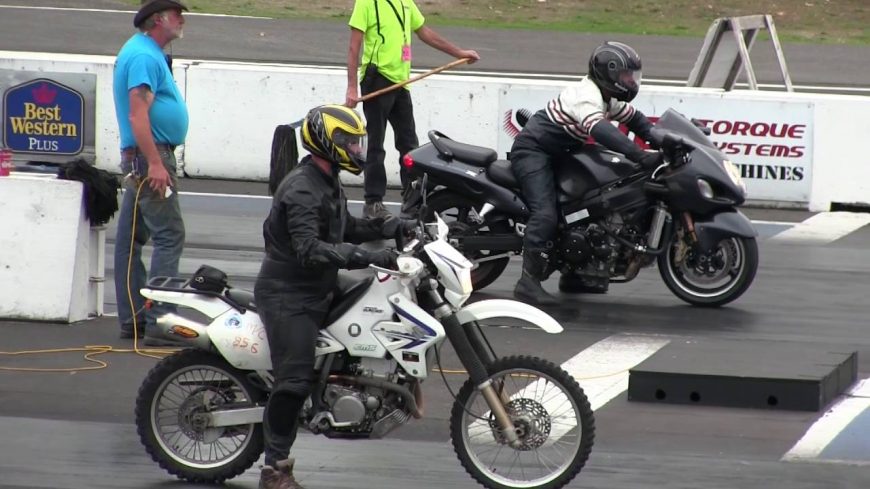 Depending on your particular two-wheeled needs, there are a ton of options in all different facets of motorcycle riding. On one hand, you can grab yourself a dirt bike for your offroad needs or some sort of street bike for, well, making your way around on public roads and having something powerful enough to get out of the way of traffic! This time, we take the opportunity to compare a couple of machines as they hit the drag strip, a competition that clearly favors the street bike over the dual sport bike but by how much?

Sometimes, even when you go out to race knowing that it’s slanted in one direction or the other, it could be interesting to see exactly what the margin of victory would be. There’s just something within those of us who enjoy racing that love to see how every sort of competition in comparison might go. One of the most intriguing parts of heading to the strip is seeing exactly how you stack up against the rest of what’s out there. Maybe from there, you could see where you’d need to go in order to reach out and snatch your goals.

If you follow along in the video below, you’ll be able to see how these two bikes end up matching up when two riders make a pass down the strip. At the end of the day, obviously the street bike is going to end up overruling the dual sport bike, but another thing to think about here is how a competition between these two would look if offroad elements were thrown into the mix. Every machine on the marketplace has a benefit over another in some way, shape, or form and this time, we really see where one of the machines in question really shines.