Dissecting the Many Errors of The Fast and Furious: Tokyo Drift 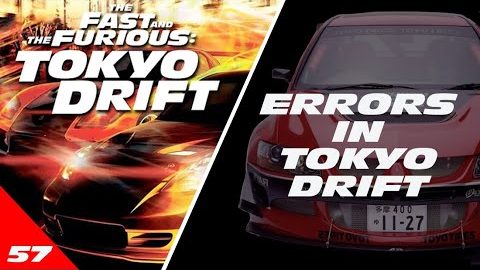 This upcoming June, it will have been two decades since the Fast and Furious saga kicked off. With eight films under their belt and a couple more on tap, the movies have definitely evolved a little bit and explored all sorts of different worlds and corners of automotive tuning culture. One of those words that came early in the series was that of Tokyo, Japan, or at least we thought.

The Fast and Furious: Tokyo Drift definitely wasn’t the most popular film in the series. However, for franchise enthusiasts, it definitely holds a special place in our hearts. This time, though, the task at hand is to break down the film from behind the scenes, learning all about what exactly came together to make this film what it was – both good and the bad.

In this one, we join in with Craig Lieberman, the technical director for the first couple of Fast and Furious movies as he gives us the inside scoop. In this one, we discover some of the errors that happened in Tokyo Drift. As it turned out, there were definitely some oversights that you might have missed upon a first watch. However, after seeing them, it’ll be hard to ignore if you ever decide to pop in the old Tokyo Drift DVD again.… DVDs still exist, right?

Down below, we get this inside scoop on everything from how the film wasn’t actually filmed in Tokyo, but instead Los Angeles, all the way to some continuity errors and downright laziness by somebody on the staff. At the end of the day, the film would end up being an important link in the Fast and Furious chain to elevate the franchise to where it is today. However, that wouldn’t come without a couple of errors that are fun to break down.