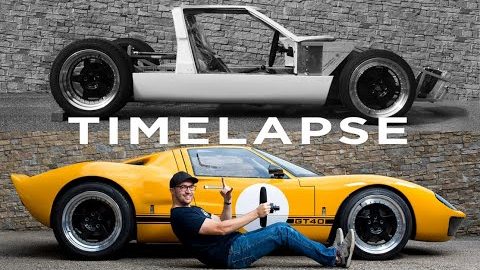 When some people see a machine like the Ford GT40 they might make it their goal to hit the lotto as these things fetch some pretty insane money. Others might take matters into their own hands to get their hands on the dream machine. Well, actually, this is probably a limited group that is headlined by YouTube creator, Benjamin Workshop, who elects to go down the path of ingenuity that is rather entertaining to watch.

If you haven’t guessed at this point, this particular creator decided to use his talents to really showcase what he could do. The concept was to build a Ford GT40 from the ground up. We can’t help but be amazed as this machine is built completely from scratch. It’s not a typical kit car where one might buy components that look like their dream car and attach them to something that already runs and drives. Instead, this GT40 replica was built completely from square one. From designing a frame to inserting the driveline, all pieces seem to have been meticulously designed so that they might concoct the perfect driver.

When all was said and done, our host tells us that about 4000 hours were poured into creating this particular ride. He started the project back in 2017 and finally finished in 2021. Originally, the creator shared the journey over on his YouTube channel where he says that the four years of work were spelled out through 70 separate videos.

This time, though, as we ride along, we get to watch all of that hard work coming together in just 17 minutes. While our host has a way of making some of these steps in the process look easy, in contrast, a project like this is an incredible feat that the man behind it should be incredibly proud of. There aren’t a whole lot of people who we think could pull this one off as it most certainly transcends beyond being a typical hot rodder.