When it comes to working in the garage, there are lots of ways to skin a cat. ...

When it comes to working in the garage, there are lots of ways to skin a cat. Depending on the job at hand, there are probably at least a handful of decent ways to go about getting it done. Sometimes, one might get creative in order to get the best finished product. Other times, though, some just get creative because they don’t have the proper tools to get the job done. Let’s be honest with ourselves, here. Some of the proper tools are really expensive and using a DIY method can oftentimes be better.

One tool that isn’t too commonly found in garages across the community would be a tire machine. There aren’t too many folks who swap out tires often enough to justify the high cost of taking on their own machine. Even those who do probably couldn’t justify the cost, either.

However, this doesn’t always discourage people from trying to take on the job at home. Instead, there are a couple of creative methods that have been used over the years in order to get tires mounted on wheels. Let’s just say that some of these methods might get a little bit sketchy at times.

This time, we check in with one of those methods that most certainly did get, well, questionable. In fact, this one very quickly veered out of control past what anybody had anticipated. Let’s just say that these guys are probably reconsidering their decision to go about mounting a tire in this way.

By following along with the video below, we check in with someone who gets a reality check on how using fire and combustibles to mount a tire can be pretty dangerous. After the tires filled up with a flammable substance, a torch is applied to it and the air within the tire is displaced, mounting it to the wheel, in theory. This time, though, when an explosion happens, it sends one of these DIYers into the air.

The Science Behind Seating a Tire Bead With Fire 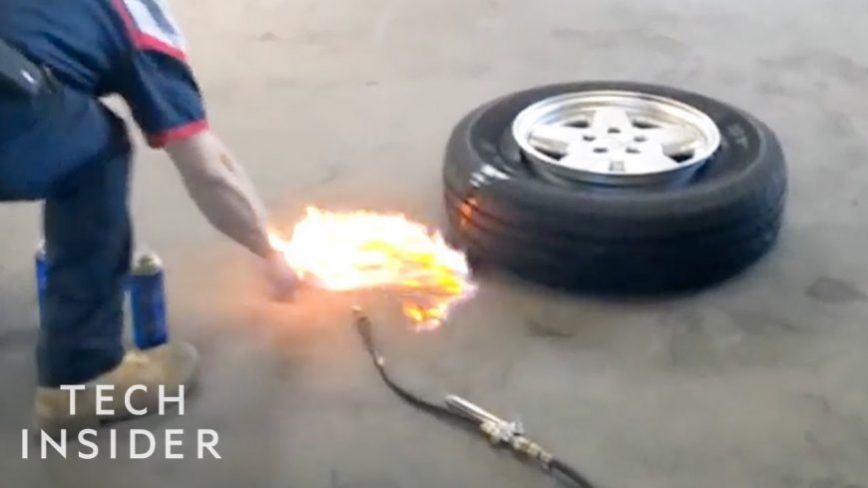