Doc Street Beast vs The 55 Wild No Prep Race In Topeka, Kansas

Doc Street Beast vs The 55 Wild No Prep Race In Topeka, Kansas

When no prep racing really gets going, I think it is safe to say that most people who ...

When no prep racing really gets going, I think it is safe to say that most people who have interacted with this form of racing can say that it’s one of the most intense forms of adrenaline that you can conjure up in all of racing. Because the drivers never quite know where they’re going to and end up as big power is put to the ground on the racing surface that’s not quite ready to handle it, the adrenaline is kicked up a notch, indeed. At any given moment, a driver who isn’t ready to handle a situation could come in between success and failure. Sometimes, not even a good driver will be enough to bring a car back from a sketchy situation that can get out of control in a hurry. This is what really makes the fans keep their eyes glued at all times.

On tap here are two of the best drivers that you’ll catch on the no prep scene and furthermore, might even be arguably some of the best racers in drag racing when it comes to throwing down in machines of this class. However, at the top end of this race, you can see just how sketchy things might get and how something like this loss of control could be problematic for someone who is just another race car driver to handle. In fact, this one might go so far is giving you as much action as you’ll be able to handle without an actual crash coming about.

If you follow along down in the video below, you’ll be able watch the adrenaline pumping display as Doc and the Street Beast end up getting out a little bit on The 55, however, before long, both cars are wiggling around and it’s really anybody’s race as both of these machines sprint toward the finish line.

Who is going to come out top here? Well, you wouldn’t want us to spoil the surprise for you, now would you? You can see the beautifully captured action from the National No Prep Racing Association down below! 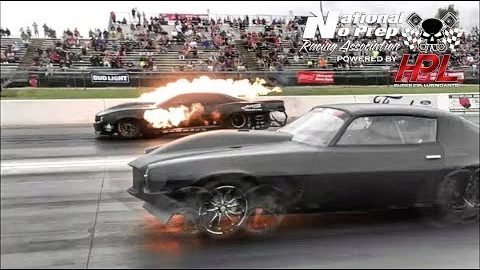