Every once in a while, you might flip on the news and see something that looks like a ...

Every once in a while, you might flip on the news and see something that looks like a scene out of a movie. For the first couple of moments, it might be tough to grasp the fact that this is actually real life unfolding on your television as the news blasts some sort of wild scenario that’s happening right in town. This time, we catch up with just that kind of situation as it appears as if somebody who was on the wanted list for a felony decided that trying to outrun the police would be a better idea. You really have to wonder exactly why people bother to run away because they’re going to get caught at some point anyway. When the police have you pinned down and all of your info is in their hands, there’s no way you’re going to make an escape.

This time, what makes this chase really special is the point that the person running away from the police officers is driving none other than the Dodge Challenger Hellcat, a supercharged beast of a car that has found its way into the hearts of many here in the car community. Don’t get me wrong, we are not in any way condoning the idea that, if you’ve a fast car, you should try to run away from the police, but watching the car dodging in and out of traffic as it pulls away from law-enforcement is definitely an interesting dynamic to observe.

As it turns out, the car would only have 18 miles until empty so the driver was forced to ditch it on the side of the road and run into a field where he would hop on the phone, probably saying his last goodbyes before he ended up in prison for a long time. It’s at this point that we see a law-enforcement officer come out of left field and absolutely destroy the guy as he tackles him to the ground.

Motorcycle Rider Crashes Directly Into The Back of a Cop Car! 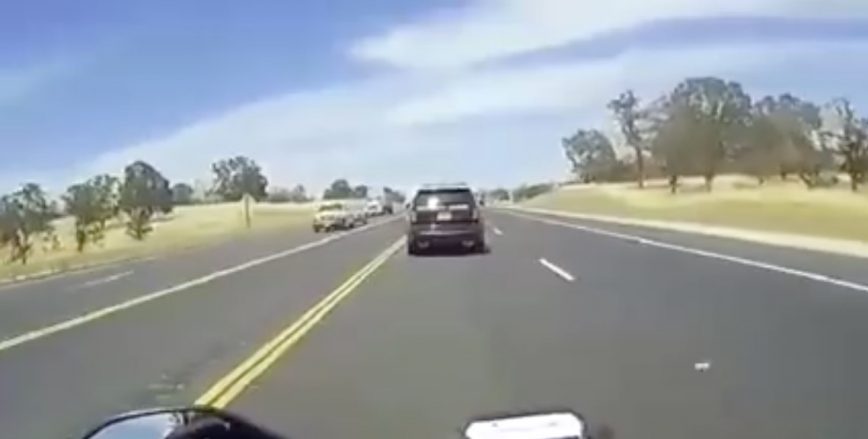