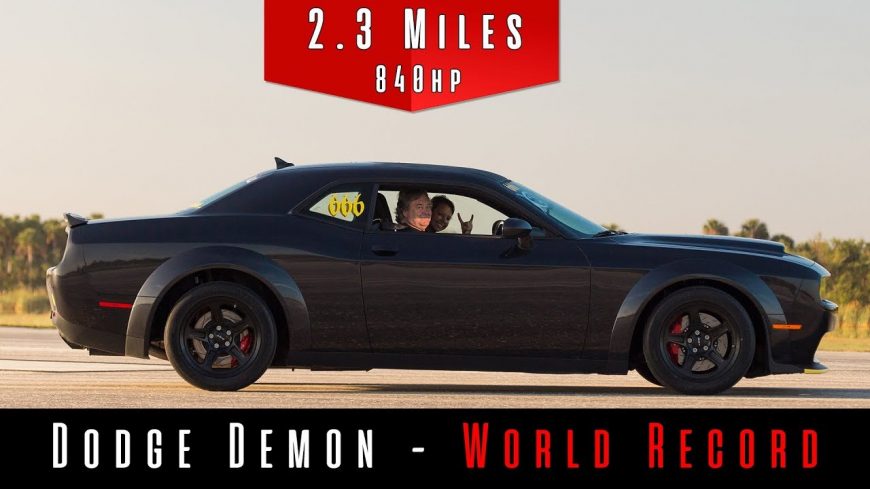 One of the cars we have been waiting on since the very moment that we heard it being announced is the Dodge Demon. The car came up with some incredibly high performance praise from its maker, saying that the machine will be able to tear through some pretty impressive heights and while we believe in Dodge, we definitely want to see this thing breaking records with our own two eyes as it has us all amped up and excited to watch this devilish machine roll! As the cars fall into the hands of owners who are familiarizing themselves the platform, we will soon be seeing all sorts of records being set and falling!

This time, we catch up with a couple of folks behind the wheel of such a car as it makes its way out to the Johnny Bohmer Proving Grounds and has a stretch of 2.3 miles of on interrupted straight-away to prove what it’s worth. Over that time, we’re able to watch and listen as the supercharged monster absolutely screams its way to a new top speed that has yet to be seen with the Demon. You really can’t blink because you’ll miss some of it and before you know it, the car manages to find its way all the way up to a top speed of 203 mph.

From what we understand, the machine has not been modified in any way but might have had the top speed limiter removed as to allow it to surpass what the factory deems to be safe. As a result, you can watch the car ripping along for yourself down in the video below that will take you to the scene of the action as this Mopar breaks off an impressive 200+ mph pass, seemingly with ease. If the ride had a little bit more space, we could definitely see this thing surging even higher in speed.

« Corvette Enthusiasts Catches the Mid-Engine C8 in the Wild, Grabs a Video