We don’t want to get all preachy but if you want to make a list of dumb things ...

We don’t want to get all preachy but if you want to make a list of dumb things that someone could do, drinking and driving definitely has to be near the top. These days, there are so many different options out there if you do decide to drink, getting behind the wheel is just inexcusable. The consequences could be downright fatal. Whenever we see videos like this, we hope that they serve as some sort of a lesson to people who might be considering making a bad decision.

This time, the scene is painted by a security camera. As the camera sits, facing a driveway with a Dodge Demon in it, things seem to be going rather normally. However, all of a sudden, a red Ford sedan veers off of the road and plows straight into the Demon. This isn’t one of those swipes that might be able to be repaired. Instead, the driver behind the wheel that was said to be intoxicated managed to get the entire side of the Demon directly. In other words, this thing is pretty much guaranteed to be totaled and it’s not exactly a car that could just simply be replaced.

Luckily, it doesn’t seem as if anybody was injured in the incident. However, that isn’t to say that no loss will be had. For those who aren’t familiar with the Demon, they may not know that this particular model was only churned out 3300 times from the factory. Needless to say, that means that getting your hands on one is going to be pretty difficult and pretty expensive. The cars were released with an $85,000 MSRP but today, the cheapest Demons that we could find came at an ask of around $130,000. Some of them inch closer to the $200,000 mark, though, depending on circumstances.

Below, we join in with the situation, as the cameras take us to the scene to witness what exactly it was that happened that day and how it was all handled.

Sportbike Runs From Police, Almost Gets Hit by a Cop at 125MPH 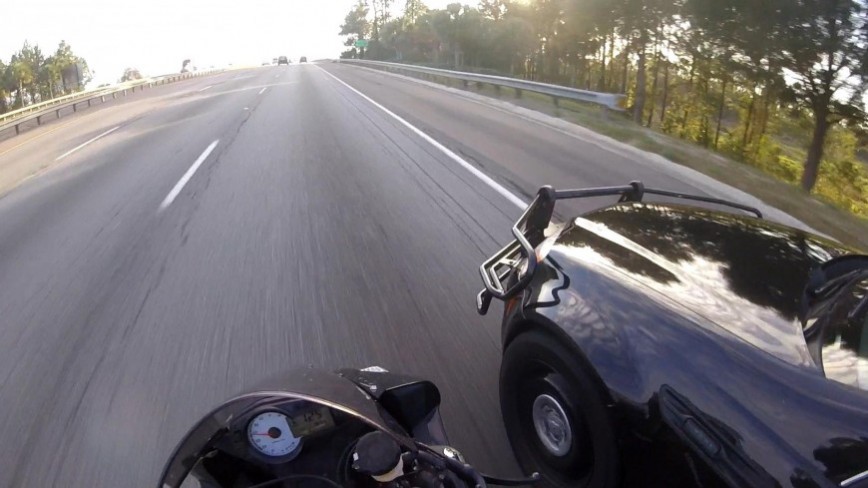