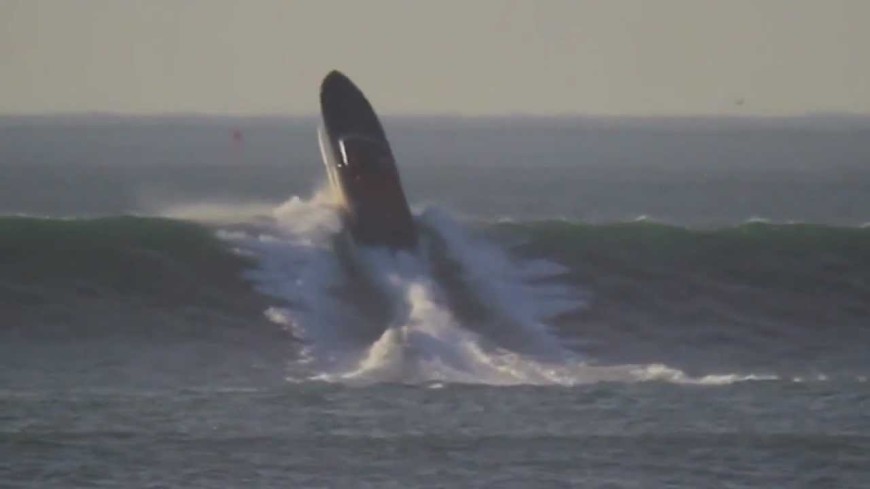 Talk about a wipe out. Three boaters cruising a 35-foot Donzi powerboat in rough waters were captured jumping clear 40 feet into the air over a wave around Ocean Beach, San Francisco. Pete Koff, 41, was just chillin’ in the beach, recording his buddy out surfing when he saw the vessel in an area generally avoided.

“I saw the powerboat sitting out on the water in the biggest swell of the year,” Koff said. “The waves were 20 feet high, and I thought to myself, ‘that’s a really bad place to be sitting.’ I have been surfing for 15 years on Ocean Beach and I have never seen anyone there.”

At first Koff kept filming his friend surfing, but when the boat drove by, he turned his attention toward it for about 30 seconds—and caught an amazing moment. As the craft climbed one steep wave after another, it reached a 20-foot-high crest while the driver accelerated, trying to ramp over it. The boat climbed the giant wave at a 45-degree angle and leaped entirely out of the water. Koff can be heard expressing his amazement, gambling that at least one of the boaters had broken a limb.

And it turned out he wasn’t too far from the truth. One of the three seamen was thrown from his seat when the boat splashed back into the ocean with such force it actually split down the middle. Fortunately, the three men were able to reach land, and the injured passengers were taken to the hospital where they were treated for broken bones and bruising.