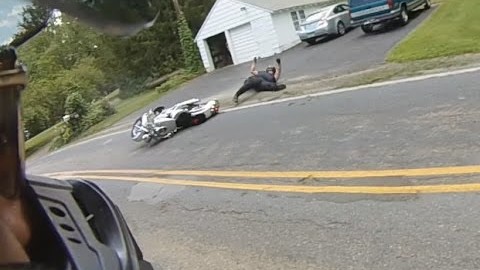 When it comes to motorcycle riding, the amount of danger is always elevated as you’re out in the open ans exposed to any possible threats. Riding out in the open like that isn’t for everyone and this video will show you why some folks choose to stay within the confines of their four-wheeled rides.

During this ride, one crash led to another, even after being warned by an oncoming Subaru driver and the people who involuntarily took part in these crashes took the opportunity to make the serious situation a little bit of fun with a hilarious “Thug Life” video. We can’t even lie here, this one had us laughing to the point where we were going to fall over.

After falling off of his Honda and sliding across the ground, one of this guy’s buddies screams out to “CALL 911!” at which point the man who fell and also happens to be an EMT says “I am 911,” at which point we know he’s going to be just fine and we simultaneously lost our marbles laughing.

Both of the riders, in fact, ended up being alright but we’re going to venture to say that the slide they just went on is probably going to leave a mark. We recommend when riding with friends to always keep an extra eye out for oncoming cars.

If you thought that this was a crazy accident go check out the related video below!

Watch as a confrontation ensues when a truck driver attempts to hit a motorcycle.

« Most Versatile Racing/Flight Simulator Ever Starting at $54,000