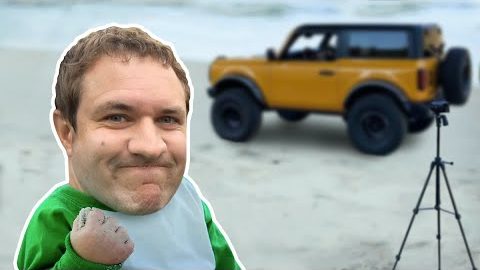 Many times, some of the top automotive journalists can end up getting the privilege of trying out vehicles early. This is something that is going to be difficult for any automotive enthusiast to turn down. Sometimes, in fact, one might find themselves getting a little bit jealous of the presenters in question who have access to some of these vehicles. I mean, what’s not to love about getting your hands on a sought after release before everyone else?

How exactly do these presenters go about getting the vehicles, though? Are brands just knocking down their doors, wanting to drop off the latest new concept to presenters in order to get the word out? As it turns out, that isn’t exactly the case all the time. Instead, it can end up taking a little bit of hard work and oftentimes, a lot of luck, to end up getting the hot releases. Sometimes, presenters will have to pay their dues with more boring vehicles before they can work their way up to the hottest nameplates.

This time, we ride along with Doug DeMuro as he explains how this interesting back end phenomenon works. As it turns out, even with a name as big as the DeMuro’s, getting one’s hands on the hottest new releases isn’t exactly a walk in the park. Instead, it might involve being in the right place at the right time. At the end of the day, though, he did manage to find himself a copy of the Ford Bronco to go over with a fine-tooth comb.

By following along with the video below, DeMuro tells the story from cover to cover about how he ended up with one of the most exciting vehicles to come out for 2021. After getting an opportunity to take the Bronco for a little while, we’re honestly not sure how exactly he could manage to find it in himself give it back.

« Doug DeMuro Takes the Deepest Dive Into the 2021 Bronco Yet!