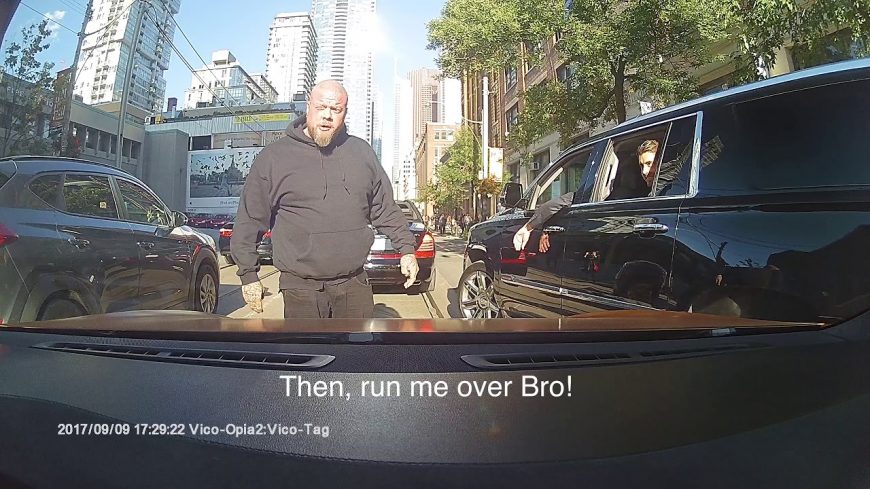 For those who are in a position that would have them vulnerable with crazy fans and potentially, enemies, getting just the right security might be a way to make safety a priority. This time, we catch up with what this video uploader claims to be musical artist, Drake, and his pack of goons that are looking to protect him as he makes his way through the streets. This road rage video is slightly different than all the rest as it is a little bit calmer but will definitely leave you scratching your head when all is said and done.

We watch as the driver of what we later discover is a Tesla is navigating his way through the streets on an ordinary commute, when all of a sudden, the motorcade makes its way in front of him, well, part of the motorcade, anyway. We watch, via dash cam, as the Tesla makes its way through the intersection, following up the Maybach that supposedly Drake is in. As he says he was caught in the intersection before the light was about to turn red, he Intended to proceed through, moving in front of a Cadillac Escalade that clearly didn’t have the right-of-way. No big deal, right?

Well, you see, inside of that Escalade just so happened to be what would appear to be Drake’s team of security and they weren’t about to let this car get between them and the pop icon. Therefore, one of the hefty dudes inside of the Escalade would get out and stop the Tesla before threatening the owner to take his car away from him and then proceed to block traffic so the Escalade could get right back in line. You have to understand that with somebody as popular as this, it’s important to keep a close eye on them for their safety, however, I’m not sure that something like this is really in the bodyguard manual, either. Check out the video below that showcases the situation and be sure to tell us what you think of what happened here.