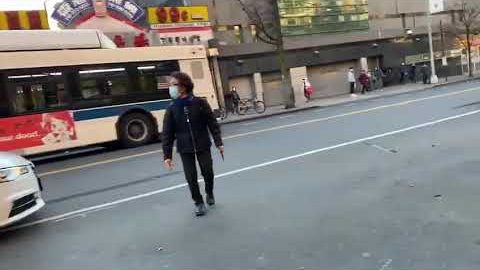 Have you ever been so mad that you just wanted to run somebody over and crash through the front of a bakery with your car in the process? It’s an oddly specific question, right?

Even if something like this was on someone’s mind, we would think that most people would probably not let the situation escalate to that point. Recently in New York City, though, apparently the driver in question didn’t harness the power of self-control. We aren’t quite sure what the individuals in question were arguing over but when the cards all ended up falling where they did, the carnage was certainly plentiful.

The picture would be painted out in front of a bakery that was just having its grand opening. Inside, the owner of the store says that there was new equipment and merchandise aplenty, ready for new customers. However, when a little bit of road rage over a parking spot began out front, a physical confrontation would escalate to somebody hitting a car with a baseball bat. Apparently, the owner behind the wheel of the car wasn’t too happy with this as he decided to plow into the person with the bat and eventually crashed through the front of this new bakery like a scene from an action movie minus the fake glass and stunt doubles.

Reports say that one of the employees is recovering after being hit by a shard of glass and all four men involved in the fight out front will be charged with assault. Some commenters around the web argue that assault simply isn’t enough and that the judge responsible for trying this case should attempt to throw the entire book at these individuals.

Following along with the video below gives us a better idea of how everything went down as a bystander caught the entire sequence on camera.