Driver Gets 15 Years in Prison For Road Rage Act

Driver Gets 15 Years in Prison For Road Rage Act

Have you ever been driving down the road and came across a situation that truly ...

Have you ever been driving down the road and came across a situation that truly infuriated you to the point where you wanted to physically take it out in some capacity? I’m just going to pose that as a rhetorical question because I think the answer is “yes” for just about everybody.

Now, as a rational person, odds are that you didn’t act on this anger but, this driver did react without a filter and they would live to pay the consequences. What started out as a situation where a motorcycle rider would attempt to pass someone in traffic turned into a driver getting themselves into trouble to the point where they would have to do a decade and a half behind bars.

Now, Instead of just letting this motorcycle rider pass in traffic, the driver behind the wheel of a car would decide that he didn’t like the fact that this rider was attempting to pass him illegally over a double yellow line. However, the way that he handled it was way less than acceptable in every way, shape, and form.

Check out the video below that shows this series of decisions that would end up making somebody regret their road rage tendencies big time. Even though most of us can handle ourselves and our anger behind the wheel of a car efficiently, this is just one small reminder that you should probably stick to screaming at your steering wheel next time you want to act like an idiot in traffic.

Hit and Run Instant Justice, Wheres a Cop When You need One? Right There! 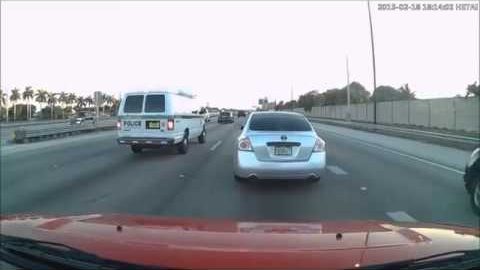