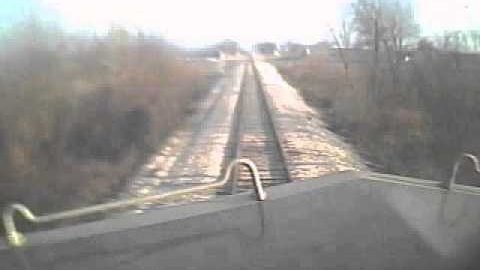 I’m not even going to pretend that watching the movie Final Destination back in 2000 changed the way I look at the world. From something as inane as opening a closet to fiery plane crashes, that movie shows you that death could quite literally be lurking around every corner and will come at you in some crazy ways.
One scene toward the end of the movie involves a car being hit by a train. The teen stars escape the actual impact, only to have the train strike a piece of debris from the car and send it sailing, decapitating one of the youngsters as they stood by the tracks. While this video isn’t quite that gruesome, it certainly captures the force and power involved when a train strikes a vehicle that’s stuck on the tracks.

In this video, we catch yet another situation that has a motorist stranded in the middle of the tracks as a train blasts by and takes out whatever happens to be in its path. When you’ve got a locomotive barreling down on you, it’s really an unstoppable object and your only hope is to get out of the way.

This time, the carnage is pretty serious as a dump truck full of rocks is seen backing over the railroad tracks when the train that is rolling with a head of steam demolishes the truck and sends the rocks flying every which way.

Get a load of the situation in the video below as a camera onboard the train captures the entire thing. No reports were made on the condition of the dump truck driver but hopefully, he managed to walk away from this ugly incident unscathed.

Think about this next time you’re approaching a railroad crossing and do your best to keep your car or truck moving. It’s a matter of feet, and sometimes inches, that can make the difference in being out of harm’s way, or right in the path of an oncoming battering ram backed by tons of cargo.