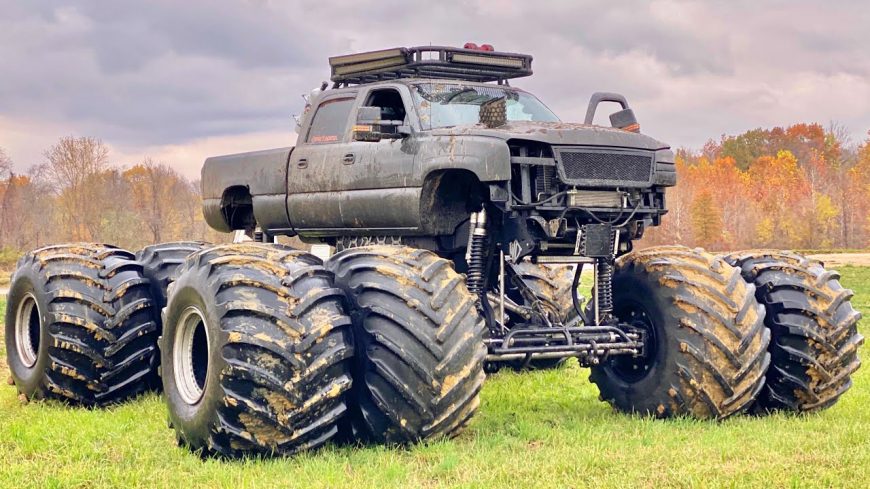 For those who have tuned in to the WhistlinDiesel YouTube channel, they might’ve noticed some recent additions in terms of toys that they like to play with! One of those machines comes in the form of a monstrous pickup truck, appropriately named the “Monstermax” as a Duramax diesel engine has been combined with a monster truck for the ultimate go-everywhere, do-everything sort of combination.

Just when we thought that such a monster truck couldn’t get any more dominant, along comes a modification that really says otherwise. Instead of running around with single wheels like a traditional pickup truck, this machine has taken on the likes of a dual wheel conversion. Essentially, it makes it comparable to a dual rear wheel pickup truck or a “dually” as one might see on the street. However, it has also adopted a second wheel upfront as well. In other words, there is double the traction for double the fun, meaning that the monster truck can be taken to even more extreme places.

This time, we follow along with the channel as our uploader goes through the trouble of upgrading his monster. After that, we get just a little bit of a taste of what a machine like this is capable of. You can bet your bottom dollar that if you thought this thing was pushed far before, you ain’t seen nothing yet. We can’t wait to see what the channel will concoct in terms of challenges for this monstrous truck to overcome.

By following along with the video below, we’re able to join in on an adrenaline rush all its own. These sorts of crazy ideas seem to be the ones that typically will stay in people’s heads. However, with WD, those crazy ideas typically end up making their way into the physical world and it’s incredibly entertaining to watch.