Chevrolet dropped a bit of a bombshell on the drag racing world at last year’s PRI ...

Chevrolet dropped a bit of a bombshell on the drag racing world at last year’s PRI Show in Indianapolis. The automaker used the performance- and racing-oriented trade show to unveil its new electric eCOPO Camaro intended for use in the NHRA’s sportsman classes.

The car, which is still technically a concept for the time being until it goes into production, is powered by an 800 volt battery pack and uses two BorgWarner motors to send the power to the wheels. It produces 780 horsepower to the wheels and 780 ft/lbs of torque. Of course, as with all current electric vehicles, there is no transmission, so all of that power is delivered at the drop of the throttle, which just happens to be great news for those reading this who enjoy a nice wheelstand!

In what I think was a bit of a shocker to those who were on hand to watch the car’s maiden drag strip voyage, the eCOPO concept certainly pulled a beautiful wheelstand as soon as the tree dropped. With little more than a whirrr and the sound of the tires trying to grip the sticky asphalt at Chandler, Arizona’s Wild Horse Pass Motorsports Park, the car launched into a new era in NHRA sportsman drag racing.

The eCOPO sat the front end down nice and smooth right around the 60’ marker and proceeded to cover the remaining 1260 feet, clicking off the timers with a very respectable 10.142 elapsed time at 130.85 MPH. Making the run even more impressive is the fact that for the car’s first ever pass, the tune was only using 80% of the available 780 horsepower. The ultimate goal for this particular car is to run mid-9 second elapsed times, and with a full 150 more horsepower available, that goal should be within reach.

We’ll keep an eye our for more footage, hopefully the car will be able to make a pass without another car in the other lane so we can really hear just how different it sounds as opposed to it’s gasoline powered brethren. 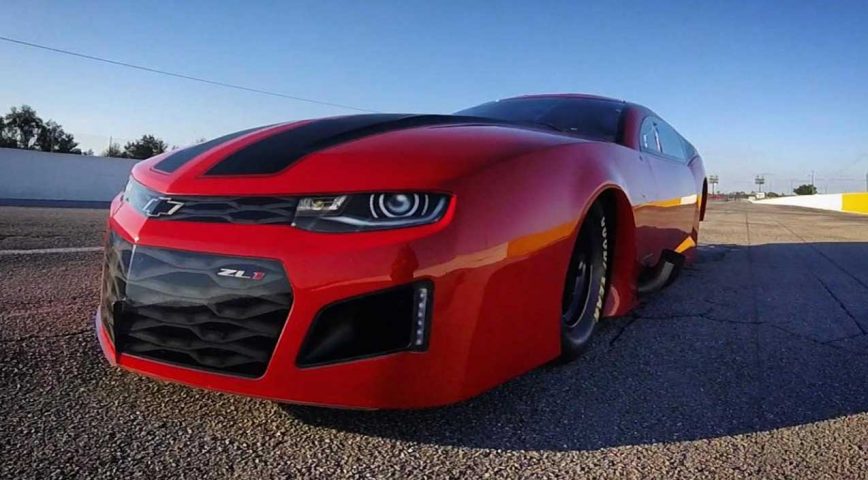