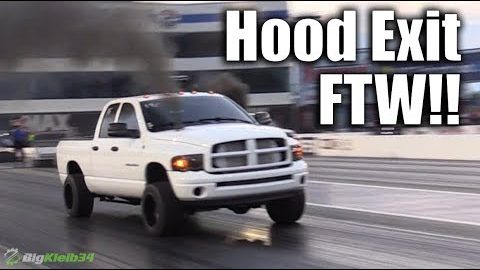 Light and powerful: those are the two factors that you want to look for when you’re hopping into a machine that you want to be dominant out on the drag strip. However, as much as a big and heavy diesel truck designed for working might not exactly fit the old school drag racing formula, the way that people tune these things and build them up means that they’ve become the drag racing heavyweights that dreams are made of. If one of these things rolls up next to you, then you might want to be on the lookout as they tend to be stout competitors.

With just the right modifications, you can make one of these monsters, that is already overflowing with torque, something to be feared out on this drag strip as well and this time, from Street Car Takeover out in Charlotte, we check out a Cummins powered Dodge Ram that is kicking back some incredible quarter mile passes that mean this thing is to be respected. The truck has some serious bite behind its bark and doesn’t care about all of the extra pounds that it’s got behind it.

If you follow along in the video below, you will see exactly why you never want to sleep on anything these days, even if it comes in the form of a big and heavy diesel truck. Sure, these machines might have a lot of weight behind them but when you look at the numbers they’re making, the torque is plenty to get them out of the hole and the horsepower will keep them going as they barrel their way through the finish line to even more impressive times. Prepare to drop your jaw at this coal roller that manages to impress out on the strip. If it weren’t for that hood exit exhaust, we wouldn’t even know that this thing was coming!

« Is Using Gas Vapor to Power an Engine a Myth? Let’s find out!