Having been with Speed Society for right at two years now, I’ve been part of a team ...

Having been with Speed Society for right at two years now, I’ve been part of a team that works hard daily to keep our fingers on the pulse of all things “Rad”, as our head honcho Charlie likes to say, within the automotive community. Needless to say, I’ve seen a lot of really badass content, to the point that it’s hard to find something that’s truly unique when it comes to awesome content.

Don’t get me wrong, we still see plenty of cool stuff, but for the most part, at this point in the game, just about everything you see has been done at least once before. This video, however, is unlike anything I’ve personally seen, and actually kind of got my heart racing.

Modern dirt bikes and street bikes are highly specialized for their intended purposes, and for the most part, you don’t really see them crossing over into each other’s realm all that often. Sure, you may see a dirt bike cruising the streets here and there, but that’s usually the extent of the crossover between the two. However, in this clip from Sebfmx, we see what happens when you put a dirt bike on the street and take a street bike to the dirt. Surprisingly enough, they both handle the transition very well, although that seems have a lot to do with the skill of the riders.

The dirt bike hangs right with the street bike as they two start off on the asphalt portion of their journey. While the rider on the crotch rocket hangs the front wheel high in the air for as long as he wants, the guy atop the dirt bike hits a huge jump over a piece of heavy equipment, nailing a picture-perfect backflip as the two head toward an off-road rendezvous.

If you’ve ever ridden anything in the grass, you know how sketchy it can be, especially if you have a lot of power and maybe not so much traction, but you can see these riders find that perfect balance of throttle and finesse as they wheel their bikes beautifully across the open fields and even through the woods for a bit.

The twist at the end makes for a funny finale too, but I’m not going to spoil that here, you’ll have to watch for yourself to see how it ends! 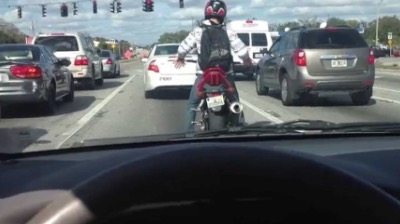