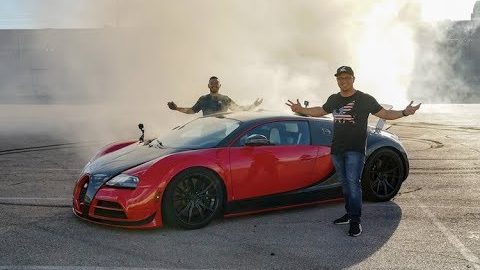 When it comes to those with the most expensive cars in the world, these individuals generally don’t modify them all that much. Usually, when it comes to cars that encroach on $1 million, owners will find it within themselves to just leave them factory and drive them around with care, making sure that nothing breaks. We do believe in driving cars like they were designed to be driven, however, we really can’t blame these individuals for trying to maintain the condition of these vehicles that are so expensive. Fixing them has to cost a bundle!

This time, however, we catch up with an enthusiast who does just that sort of beating while behind the wheel of one of the most expensive cars that money can potentially purchase. Instead of doing anything that even resembles using caution, it looks like this guy is ready to beat the life out of his Bugatti Veyron. He even goes through the lengths of converting it to rear wheel drive for a little bit of extra fooling around and tire killing when he mashes the throttle. This is certainly the way that we would all love to drive a Bugatti, if we would be fortunate enough to get our hands on one.

If you follow along down in the video below, you’ll be able to catch up with how exactly one converts such a car from all wheel drive to rear wheel drive and what the fun looks like after the fact when you get the chance to really beat on it. After spectating this one, you might just get the itch to go out there and do something like this for yourself, obviously, probably without the Bugatti and instead with whatever is in your driveway. However, this is really some awe inspiring stuff that we’re seeing!