Alex Laughlin was the first NHRA driver to fly the Speed Society colors, and a huge ...

Alex Laughlin was the first NHRA driver to fly the Speed Society colors, and a huge part of the reason we teamed up with Alex and his team is his unquenchable love for the sport of drag racing. Not only does Laughlin pilot his Gas Monkey Energy-sponsored Pro Stock Camaro, he also drives a nitro-injected A/Fuel dragster flying the Gas Monkey Energy colors. Of course, most of America was introduced to Laughlin when he was tabbed by Richard Rawlings to drive for Team Fasn N’ Loud against Big Chief and the new Crow on Mega Race back in early 2017, a fiasco that didn’t exactly go so well as far as Alex’s popularity among the television-watching audience thanks to how things played out on the show.

However, anybody who’s spent any amount of time with Alex quickly realizes he has an insatiable desire to go fast, a passion that has fueled his career since he was just a kid. This season, Alex has decided to tackle a whole new monster in his quest to drag race all the things: he’s going radial racing! We all know in the radial world there are a handful of huge races that everybody considers must-see events, and two of them are just a few weeks apart, the first of which is less than a month away. Duck X Productions’ Lights Out 9 is the race that kicks off the season in the small tire world. There are events before Lights Out each year that feature some radial racing, but everybody who’s anybody, and anybody who wants to be somebody knows they have to make a name for themselves at Duck’s races, and that is where Alex plans to jump into the ultra-competitive Radial vs the World class.

If you’re going to compete in RvsW, you have to bring a missile launcher to the gun fight, so Alex picked up the biggest piece of the puzzle when he bought one of the baddest cars to ever race on small tires. Built for the class by Kyle Huettel and campaigned by his teammate Jason Michalak, the Blue C6 Corvette you see – which will have a little different look once the killer Speed Society wrap seen above is applied – was a force to be reckoned with in the class just a couple of seasons ago. Unfortunate circumstances pulled Michalak away from the sport and the car ended up in the hands of anther Texan, Marty Robertson, who picked it up when he crashed his one-of-a-kind Barracuda and needed a race-ready replacement while it was being repaired. With the ‘Cuda nearing completion, Marty was looking to unload the ‘Vette and Laughlin just happened to be the guy, so now he has a wicked screw-blown Corvette on hand. You are getting the first look at this rendering, which Alex received just minutes ago!

Making the transition from Pro Stock and A/Fuel to radials is more than just buying the car and going racing. The Camaro is naturally aspirated with a clutch and manual trans on huge slicks that require a bit of “slip” to keep the wheel speed and engine RRM up. The A/Fuel car is also naturally aspirated and relies on a top fuel-style clutch to get power from the engine to the rear tires, which are also massive. Radials are significantly smaller, both in diameter and width, and where slicks slip a bit, radials either dead hook or go up in smoke, so the power has to be applied in a completely different manner. That’s an issue that will have to be addressed, but Alex shouldn’t have any problem finding a consultant to help with the power delivery.

Speaking of power, the screw blown powerplant in the ‘Vette makes a ton of it, and to help extract every single pony out of the combo, Laughlin has brought on pro mod legend Mick Snyder, the PDRA Pro Extreme world record holder who has a ton of experience with the type of bullet in the car. With most of the pieces in place, expect Laughlin to roll into South Georgia with a car that is capable of running up front straight out of the trailer. We will be on hand to get some photos and video of him in action, along with the rest of the baddest names in radial racing coming up in just a few short weeks! 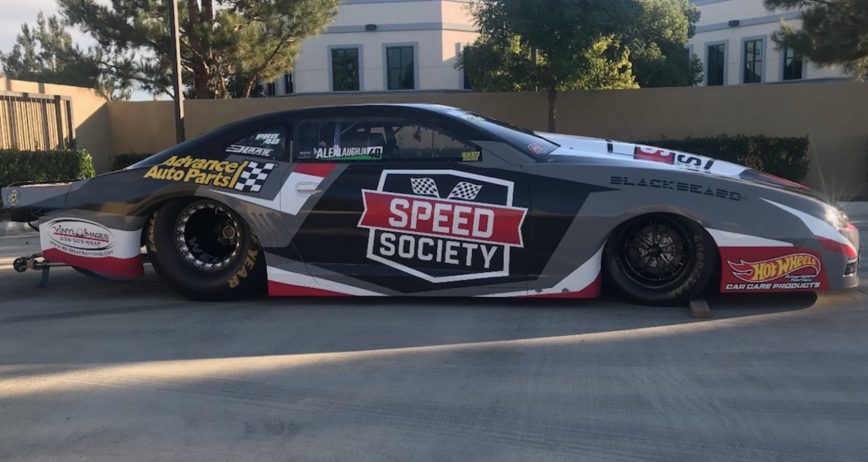