Expensive Yacht Gets Slammed Against Concrete Dock During Storm!

Expensive Yacht Gets Slammed Against Concrete Dock During Storm!

Most any high end luxury yacht can withstand pretty choppy seas. The vessels are ...

Most any high end luxury yacht can withstand pretty choppy seas. The vessels are built to handle pretty large swells and stay upright and afloat with no major issue, at least to a reasonable extent. However, if one of these luxo-liners happens to be docked when the sea gets angry, that could present a whole new set of problems for the yacht to have to deal with.

The most obvious issue, especially in the case of the video below, is going to be the hull of the yacht being wrecked by the dock as the waves batter the vessel against the solid concrete dock over and over. You don’t really have to look that closely to see the scars that have been gashed into the hull, and each of those is not only an expensive fix, they could penetrate all the way though the boat’s exterior and allow the inside to fill with water, resulting the the boat sinking.

There’s also the problem of the family aboard the yacht, and how they’re going to exit the wildly-pitching vessel. The waves are relentless, but with the help of what appears to be members of of the local police force they’re able to carefully extract the family members and get them to safety.

I’m hardly a nautical expert, but it seems like there had to be some kind of mechanical failure for such a high end vessel to end up wedged in the corner of a dock like this. It seems if the captain had dropped anchor a few hundred yards off shore, the boat would have turned to face the waves, which aren’t really that big away from the dock, and been just fine until things settled down. Whatever the cause, the damage is pretty serious and will likely cost six figures to fix, if not more. There’s also a very real chance the pounding was more that the boat could handle and it didn’t make it out of the dock at all.

Disney Cruise Ship Slams Into Dock... Captain Goofy May Be Looking For a New Job 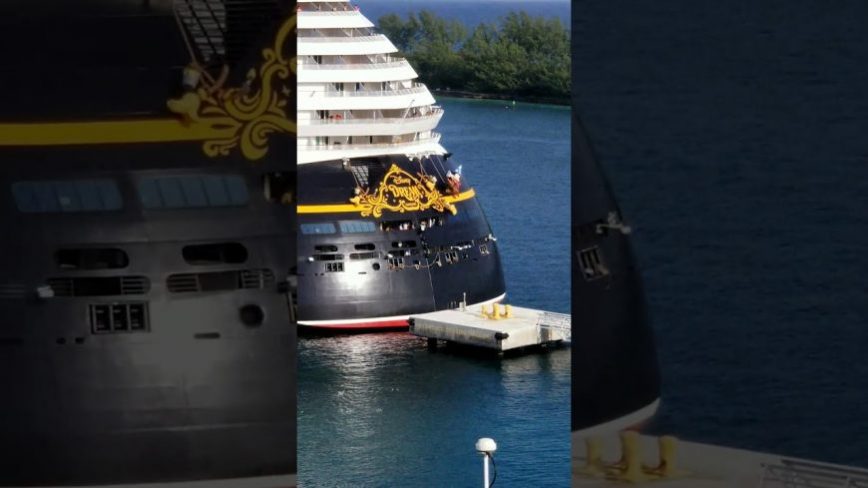