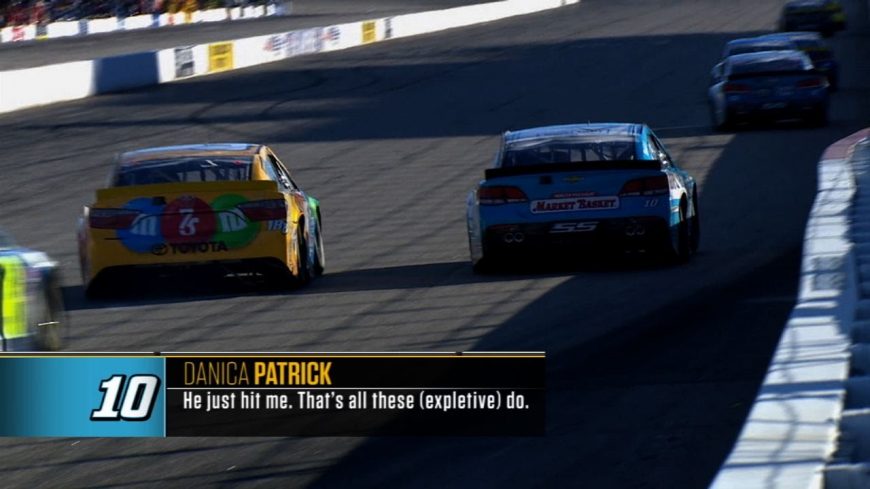 The sport of NASCAR is full of its fair share of bumps and bruises. With that many cars speeding in excess like that on such a small track while jocking for position, a little bit of contact is pretty unavoidable.

However, even though some hot and heavy situations might happen here and there, there is still an underlying unspoken courtesy between drivers as they attempt to keep everything clean. If one driver sees another as getting out of line and breaching that unspoken courtesy, well, things can escalate in a hurry.

In order to bring you closer to the action, NASCAR puts together a little series known as “Radioactive” that gives you an inside scoop on what’s going through the racers’ heads in the process of the race as you can hear them chattering on their intercoms.

In this particular situation, we catch up with the blowback from Danica Patrick when she thought that Kyle Busch was stepping out of line during a race and to be frank, the conversation wasn’t exactly civil.

While behind the wheel of that high-powered racing machine, Patrick hissed “He just hit me!” she continued that “That’s all these f***ers do,“ insisting that a clean racing environment is hard to come by.

Like it or not, that’s the way things work and Patrick would be defined by the way that she reacted to the situation. It was at this point that Patrick would decide to put Busch into the fence before placing 18th.

Check out all of the intercom chatter from the race in the video below and tell us what you think of this volatile situation. These are a couple of drivers that we wouldn’t want to get in the way of.

« 101 year old gets one last ride on a Harley Davidson