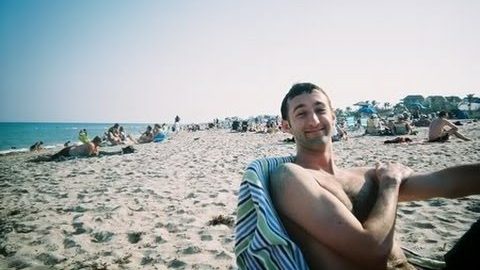 The title of this video is a little misleading, as this FA-18 actually did not break the sound barrier. Instead, the pilot is pushing the plane, which is certainly capable of going supersonic, just to the edge of the sound barrier.

An actual sonic boom is powerful enough to shatter glass, so blasting a beach full of spectators with a noise loud enough to rupture their ear drums would be irresponsible and would result in a PR nightmare for the military. Also, the military has very strict regulations in place regarding sonic booms over land, so this pilot would be risking his career if he were to pull such a stunt.

What you’re seeing, instead, is the FA-18 going transonic, meaning it’s within a couple of perfect of the speed of sound, fast enough that it creates the tell-tale vapor cone around the craft and certainly sounds insanely loud as it screams by, but the noise you’re hearing is simply the exhaust from the jet engines doing their thing!