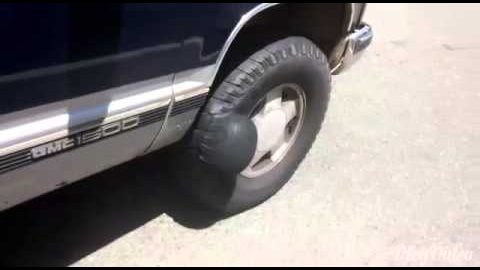 Read this BEFORE you watch the video below: go ahead and crank up the sound, we have a little bit of a challenge for you!

This video is only 48 seconds, so there’s not a lot of opportunity in there to sneak in a jump scare, but between watching it myself and reading the comments, nobody was ready for this tire to explode, so we want to see how many of you jump out of your seats when the massive sidewall bubble on this SUV pops!

We see this happen pretty often, especially now that everybody has a high def video camera in their pocket. The Tahoe’s owner was driving on the freeway when he felt what he thought was a wobble and stopped to investigate. Walking around the SUV, he found the massive growth on the sidewall of his front passenger side tire. As he’s talking to the camera, sort of narrating the situation, the bubble ruptures, sounding very much like a gunshot. As anybody would, the owner flinched, but you can clearly see the bubble let go.

He also had the idea of replaying the rupture in slow motion, so we get a great look at the pop slowed down.

Sidewall bubbles are caused when air manages to force itself in between the inner part of the tire and the body, causing the layers to separate. As the air continues to push its way out, the bubble grows in size. Some of them reach basketball size before they rupture, usually in pretty spectacular fashion. Nearly all sidewall bubbles are caused by some kind of impact, either with a curb or debris on the roadway.

This guy may have lucked out having the bubble pop when it did. If he’d been any closer, it could have easily sent a chunk of rubber his direction and while it likely wouldn’t have hurt too bad, it could have certainly stung!