Today, it seems like everything is subscription-based and there’s a good reason ...

Today, it seems like everything is subscription-based and there’s a good reason for it. That reason is that companies are able to make more money the longer they can sell something to their customers. In other words, a subscription or some sort of proprietary measure of prevention to fixing the equipment can keep customers coming back, forcing them to pay for more.

Where does something like this cross an ethical boundary, though?!

With this idea in mind, some companies have gotten rather creative. As we have seen, though, this creativity doesn’t always end in the most ethical situations, in the eyes of some. This time, we talk about the many products that prove to be impossible to work on without the help of the manufacturer.

On a personal level, a 20-something like myself has noticed that the previous generation is hesitant with technology sometimes. If I had a dollar for every time my dad referred to only “Wanting something he could fix with basic tools,” I would be rich. Technology does have its upside. However, after looking into the practices of some companies today, maybe he was right.

Today, things have gotten rather crazy to the point where some companies have basically blocked or are trying to block all repairs that happen outside of their facilities. With this, entire organizations have spawned behind the “Right to repair” movement. These folks are literally fighting to be able to fix their own things.

This time, we take a look at the concept as it applies to farm equipment. Most probably don’t come into contact with farm equipment on a regular basis but it’s still incredibly relevant. Why? You see, most of these same exact concepts apply to the automotive market as well. One look at the Rich Rebuilds battle with Tesla spells out another chapter from the same book. That’s not where it stops, either. All sorts of corporations look to implement the same model behind their products.

Across the board, companies seem to safeguard repair techniques, including the software so only they can do the repairs. This means that consumers might not have the ability to diagnose, repair, or link up machinery with different accessories. For a tractor with a simple mechanical problem, this creates a big issue. It could very well turn a cheap repair into a situation where a tractor needs to be transported to the dealer. With such big pieces of equipment, this could end up getting downright expensive.

How do the farmers solve this issue? Well, long story short, they’re going back to the dark ages of the internet. Let’s just say that the process has to be improvised which might even include bootlegged software.

“This complicated issue impacts all equipment manufacturers with embedded software in their products.

Customers, dealers, and manufacturers should work together on the issue rather than invite government regulation that could add costs with no associated value.”

The video below from Freethink spells out the entirety of the story including how things like the Digital Millenium Copyright Act come into play. We never would’ve thought that we would see a day where people were arguing about the right to repair their own farm equipment. 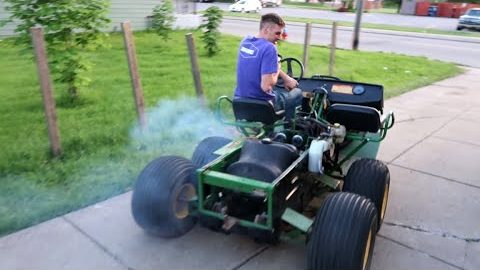