Farmtruck and AZN do Epic Burnouts For Wyatt, What We Learned From #BurnoutsForWyatt 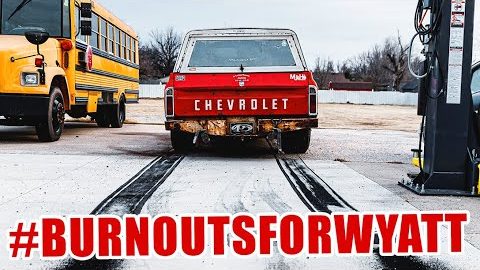 We regret to inform you that as of last evening Wyatt Spann has passed away. However, if you ask us, that most certainly isn’t the end. In fact, we think that it’s just the beginning. This young man has managed to inspire so many people beyond what he can probably comprehend at such a young age. Even after his passing, we think that his story will go on to inspire even more.

For those who aren’t familiar with Wyatt, the little boy was told over a year ago that his battle with cancer wouldn’t last long. All this time later, while the world has lost the beautiful soul, his mark has proven to be incredibly immense. As the car community found out that he loved himself a good, old fashioned burnout, the movement began. As the viral story grew, countless members of the community shredded their tires to show solidarity for this young man. The support came when he needed it the most. A byproduct, though, was something that we’re not sure anyone expected.

On the other side of a life that was cut far too short, Wyatt has managed to leave behind a legacy that can and should impact everyone that it touched. Such a story of courage and fight stands to make a positive impact in this world that I think we can all agree that we need.

This time, Farmtruck and AZN are the ones helping to spread the word. In typical FNA fashion, they break out a positive vibe and lots of oddball rides to shred some rubber.

If videos like these can inspire one person to do some good or inspire someone to keep on fighting, no matter what the situation, then they’re more than worth it. At just four years old, Wyatt has managed to inspire us to see what we’re capable of as human beings. For that, we thank him.

« The World’s Most Modified Big Rig Comes to Life