In a clip you’ll only see right here on Speed Society, we caught up with Farmtruck ...

In a clip you’ll only see right here on Speed Society, we caught up with Farmtruck and AZN as they meet a very special Street Outlaws superfine named Colby and give him a tour of the one and only Farmtruck. The 405’s fastest comic duo teamed up with the Make A Wish foundation to get Colby and his parents some face time with OKC’s Outlaws, where young Colby got an up close look at the famed hauler.

Before he could take a look under the hood, though, Colby had to meet everybody, so a round of introduction and handshakes were on tap, followed by an introduction to Suzie, Farmtruck’s beloved canine companion. Once the hands are all shook, young Colby climbed up on the trailer and took a look under the hood at the massive nitrous-fed big block that powers the pickup on race night and those infamous fishing trips. Colby seems to focus in on the custom skulls placed under the hood, a design that was custom made and created by AZN himself at the Firehouse.

From there, they take a walk around to the back of the truck, where Colby gets a peek at the inside of the camper shell, a place that, at least as far as I remember, the Street Outlaws film crew hasn’t even been allowed to see. Farmtruck shares a little info about the roll cage and how it can be removed so that the bed itself can come off if needed. Farmtruck also points out the stress cracks in the camper shell from all of the hard launches, and young Colby is quick to point out, in his undeniable southern drawl, if you simply flip the bed over, it won’t leak anymore.

It’s great to see the 405 crew with their fans, hanging out and making them feel like part of the Street Outlaws family. What the Make A Wish foundation does for these kids is nothing short of spectacular and thank them for making this moment a reality for Colby and his family. 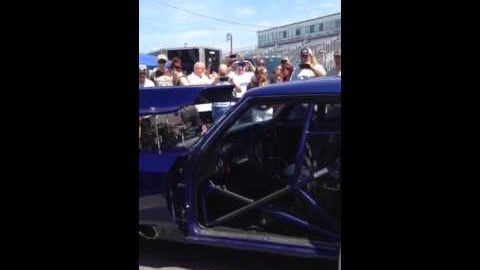