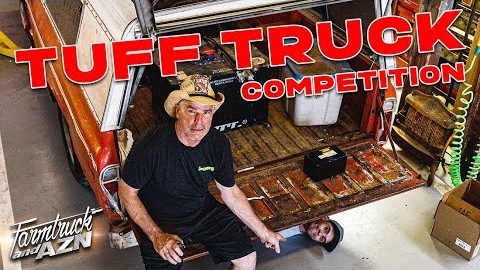 As we know, Farmtruck and Azn seem to be a couple of guys who just can’t stay put. Every time that we look, they seem to be concocting a new creation. Each and every one of these creations finds a way go out and compete in some fashion. This time, it’s not exactly going to come in the format that we’re used to seeing.

You see, most of the time, when we report on the duo, they’re getting ready to go drag racing. It might not always be in the most conventional way. It is in a straight line most times. The “Dirt Farmer” is going to go off of the beaten path a little bit though. Instead of drag racing, the crew will be taking on the Tuff Truck competition in Delaware this weekend. We think this one is going to be a lot of fun to consume.

Via their website, we learn that “The Dirt Farmer started it’s life as a vehicle where we could compete in Enduro Races that were hundreds of laps long! We’ve been thru hell and back with this truck, as you’ve seen on Street Outlaws, and now we try our hand at something new! Proving to be a jack of all trades kind of vehicle, the Dirt Farmer is ready to take on some Tuff Trucks!”

If there’s one thing that we know for sure, it’s that we can’t wait to see the duo head into the dirt. We’re sure that they’ll be throwing this beast into the air as well!

Just when we thought that they were mixing things up on the strip, it’s bound to be wild as they tackle a new beast. There’s no telling exactly like this one is going to pan out. The only way to find out is to head over to Delaware International Speedway this Saturday to enjoy some action.

« Farmtruck and Azn Do Battle At Outlaw Armageddon 5!