Farmtruck and Azn Take a Tour of the National Trail Raceway – ANOTHER BUYOUT OFFER? 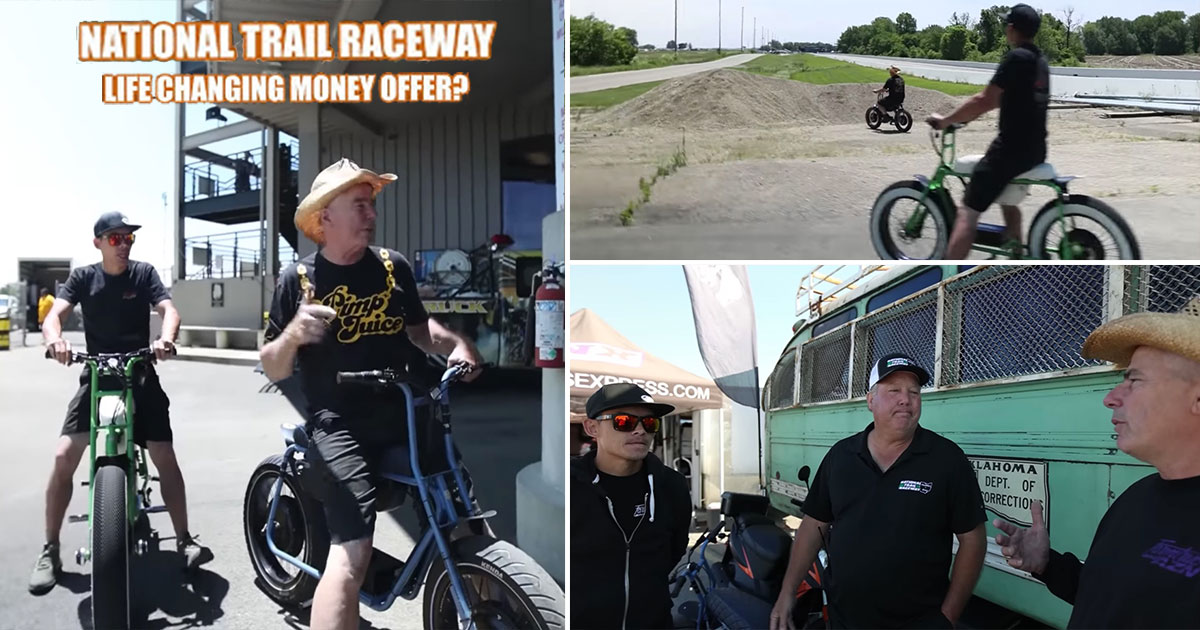 This time Farmtruck and AZN are at National Trail Raceway in Ohio for another filming of “Locals Only” a new show we are hosting for Discovery Channel! They tour the track and talk to the track owner of the history and future of the track.

The History of the Track –

The NHRA’s national event known as the Springnationals bounced around among three different sites from 1965-1971. Wally Parks, founder and head of the NHRA at the time, decided to move the Springnationals to National Trail Raceway in 1972, based on the popularity of drag racing in central Ohio. According to National Trail Raceway’s website, “…the race drew more than 40,000 spectators and 600 cars. On both Saturday and Sunday, the (admittance) gates had to be closed while cars were still sitting on Route 40 waiting to get in to the event as the grounds were already full.”

In 1976, Shirley Muldowney became the first female to ever win a national event in the Top Fuel Dragster category. In 1982, the first-ever all-female professional final took place between Shirley and Lucille Lee.

For most of the Springnationals’ history, the event was run in the month of June, often on or around Fathers Day weekend. But, due to Ohio’s sometimes unpredictable weather, some feel this is why the performances of the race cars were usually not as quick or as fast as at other NHRA national events. The unpredictable weather often made for unpredictable track conditions. Thus, a number of crew chiefs would often have trouble knowing how to properly tune and prepare the race cars to run well. This led to many upsets during eliminations. In fact, several drivers scored their first, and sometimes only, national event win during the Springnationals at National Trail.

Because the track was built between two roads, United States Route 40 and Refugee Road, National Trail Raceway was known to have one of the shortest (post-finish line) shut-down areas of any event on the NHRA national event schedule. In the early 1980s, the NHRA and National Trail Raceway used catch-nets on Springnationals weekends to help stop some race cars that couldn’t slow down enough to safely turn off the end of the race track. But, in 1984, Top Fuel Dragster driver Doug Kerhulas had a problem stopping his race car by the end of the shutdown area and drove his car into the catch-net, as drivers were instructed to do. Though the catch-nets did stop his race car from going onto Refugee Road, the sudden stop caused by the nets also nearly killed him. So, in 1986, the nets were replaced by sand pits. Ironically, Funny Car racer Gary Phillips couldn’t slow down in time and drove his car into the sand pits. But he was carrying so much speed, that his car still went through the sand pits, across Refugee Road, and into farmer Herb White’s front yard. The race car did not hit any vehicles and was able to miss the farmer’s house. However, this was the only time the sand/gravel traps were not able to stop a vehicle, so NTR continued to use them any time the NHRA was in town.

The NHRA and National Trail Raceway eventually worked out a deal with the Ohio State Highway Patrol to close down that area of Refugee Road during Springnationals weekends. This allowed National Trail to connect the end of the shut-down area to Refugee Road, giving drivers a little more room, if needed, to stop their race cars safely. And they worked out a deal with Herb White to move the sand pit to the side of his front yard, just in case.

The NHRA purchased the track from the Rader family in 1996. A first offer was refused, but when the NHRA threatened to pull the Springnationals from the track, a deal was reached. National Trail became one of the few tracks in the country to be owned directly by the NHRA. Shortly thereafter, Pontiac began sponsoring the national event held at NTR, and changed the name to the Pontiac Excitement Nationals and eventually the Pontiac Performance Nationals. The NHRA event was then moved from mid-June to mid-May. In 2006, possibly due to cooler weather conditions and better track conditions, Top Fuel driver Tony Schumacher set a new NHRA national speed record of 336.15 mph. Following the 2006 NHRA season, National Trail Raceway ceased hosting a national event and the Pontiac Performance NHRA Nationals was moved 100 miles north to Summit  Park in Norwalk, Ohio.

For many years, this event was one of the more prestigious national events on the NHRA calendar. In the 1970s, Diamond P Sports produced NHRA’s syndicated television coverage of select events, and ‘the Springs’ was one of those events. In the 1980s, it was annually televised on either TNN or ESPN, and for much of the ’90s it was broadcast nationally on either NBC on ABC.

In 2010, the NHRA still owned the facility. The NHRA Lucas Oil Drag Racing Series and the NMRA hold events at NTR. NTR also holds events such as the Buick Nationals, the Mopar Nationals, and the Night of Thunder, which features jet cars and wheelstanders.

NTR has also hosted the NHRA National Hot Rod Reunion and Super Chevy Shows in the past.

On November 5, 2011 the NTR held the annual Ohio High School Athletic Association state cross country running championships. The meet was formerly held at the Scioto Downs racetrack but moved to NTR due to the introduction of slot machine gaming at Scioto Downs.[1]

In 2017, Shelby Development, LLC purchased National Trail Raceway from the NHRA. The company also owns Heartland Motorsports Park in Kansas, which they acquired in 2015.[2] The following year, Jay Livingston became general manager and co-owner of the track.