If there’s one thing that we love about the dynamic duo of Farmtruck and AZN, ...

If there’s one thing that we love about the dynamic duo of Farmtruck and AZN, it’s that they’ll race just about anything with wheels. Heck, we wouldn’t even be shocked if they started racing some things without wheels. It seems like these guys have it in their nature to compete with the most unlikely of platforms. After all, their jumping off point to fame was a beat up old Chevrolet C10 pickup truck. Up until that thing really made its impact, nobody would’ve thought that the big old lead sled would be capable of much. However, these two have shown that they’re willing to run no matter what!

Whether it’s Farmtruck or the Gonorail, we realize that some of their rides are faster than others. However, with either one of these guys behind the wheel, they have a way of making the machine interesting. This time, we catch up with another off-the-wall platform as the dynamic duo is testing out a golf cart. The machine that goes by the name of “Tee’d Off” will have Farmtruck behind the wheel. That isn’t where the fun stops, though. As one can imagine, a traditional opponent wouldn’t do for such a vehicle. Instead, they’re going to be taking on a big rig. That’s right, a golf cart is taking on the heaviest hauler on the roadways.

By following along with the video below, we get an inside line on what exactly a race like this looks like. We would probably just recommend buckling your seatbelt. This one could end up going in plenty of different directions. We also get the hunch that the golf cart isn’t exactly a stock machine. No matter what, though, on the other end of this, most are probably going to admit to having a good time. It’s pretty hard not to with a race stacked up like this! All of the action comes at you from the Coffeyville Street Drags as covered by the National No Prep Racing Association.

Team "FnA" Take on Hellcat With the Gonorail 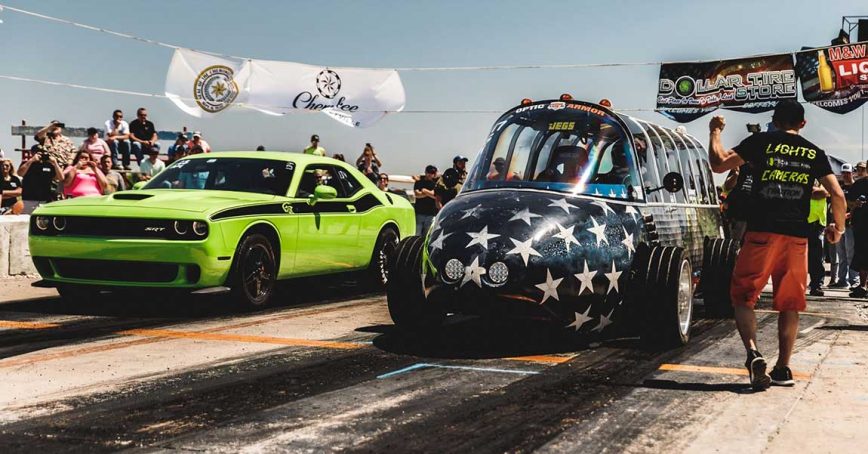