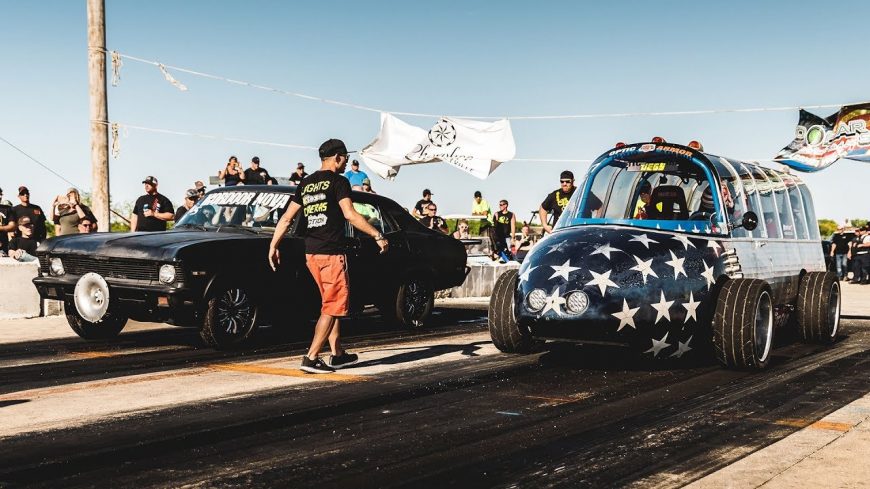 If there is one thing that we can expect out of Farmtruck and AZN, it’s that they have been known to make some pretty wacky racing machine. Even with the vehicle that they became known for, the Chevrolet C10, known as “Farmtruck,” their brand has always seemed to be that which is unconventional.

This has trickled down into other builds that they have taken part in. Whenever they unveil their next creation, we know that it’s always going to be something that piques the imagination. There’s no telling what’s coming next from the dynamic duo.

This time, we check out a couple of their creations. First and foremost, we get to watch the duo’s souped-up golf cart going at it against a semi truck. Yup! This race is really one-of-a-kind and is sure to leave some folks with a confused look on their faces. Before long, though, it’s time to bring out the “Mordoor Nova,” a play on the Murder Nova, of course. Just as it sounds, this grudge machine brings more doors to the table. Slaying the competition is the name of the game with a little more room for passengers!

Lastly, we have the “Gonorail.”

This mad machine brings more of the same. The LS2 and  F-1A-91 ProCharger supercharger powered machine is really something unlike anything else. Created for Mega Race 2, we can’t say that we have ever seen a machine quite like this one. Wile the monorail design makes this thing look more like a bus than a racing vehicle, we assure you that It certainly has some “go” behind it. In fact, we might even qualify this thing is a sort of super sleeper.

By following along with the video below, we get to catch up with the action as the trio of machines gets to work. With these two, you have to keep those eyes peeled! We never know what’s going to come next!

« The NEW KING SLING 2019 Dennis Anderson is BACK!