If you’re anything like we are, you like walking down memory lane and seeing some of the best matchups replayed over and over again. Even if you aren’t, this is one matchup that you simply won’t be able to resist. The combination is just that juicy!

In one lane, we have the Street Outlaws fan favorite, Farmtruck but he isn’t in his Chevrolet C10 racing machine. Instead, he decided to bring his super wheelchair to the track to face off with an opponent that is just as unconventional as the wheelchair itself.

In the next lane over, we have another vehicle that doesn’t quite often see the surface of a drag strip in a monster truck. That’s right, massive mud tires and all, this jump taking, dirt destroying badass changes of the scenery a little bit in the name of racing the wheelchair.

It might sound obscure but due to the combination of factors, one can’t help but be intrigued at the possible outcomes of such an event. Be sure to check out the truly one of a kind matchup that was captured at American Outlaws Live as seen down in the video below. Ladies and gentlemen, this is what entertainment is all about!

A younger Farmtruck on pinks all out, the ultimate sleeper 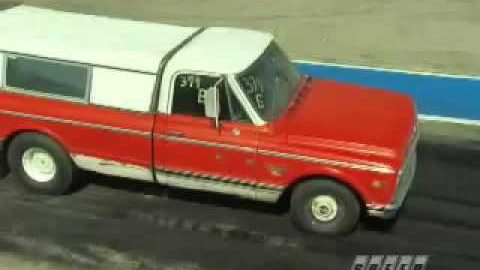