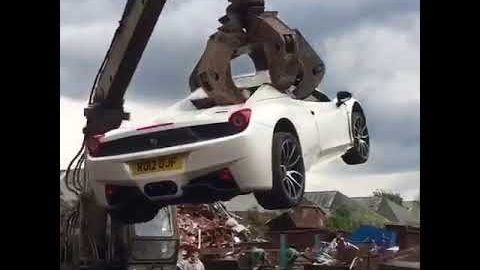 As of late, it seems that we’ve been getting some pretty crazy stories going on the news and that continues even more out of Birmingham, England as an individual claims that the police illegally seized his vehicle and before he had the opportunity go and get it back, he claimed that they crushed the car to the point that it wasn’t even recognizable.

As the story goes, Mr. Zahid Khan was driving along one day and was stopped. After he failed to provide the proper paperwork with his vehicle that the police thought to be stolen, they decided to repossess the car. According to the owner, it was a giant headache but eventually, he would hope to have his day in court to explain the situation and get back his Ferrari 458, however, that day would never come.

“Khan stated, via the Daily Mail, “My car was insured, and I was the owner. They went behind my back and removed a court order that was imposed on the car without notifying my self or my legal team, although the police was put on notice that if they were to go court, they had to inform us first.”

“They failed to return my car so I had no choice to take the officer to court. So we put them on notice to attend court, in return the officer went to court behind our back a few days before the hearing that we arranged with them and removed the car from the court order and destroyed it the next day!!”

I’m not sure if this sounds more like a real-life story or something that you would see in some sort of movie, however, that is the situation that’s in front of us. After getting the details on this one, be sure to tell us if you think that Mr. Zan is being honest or not about the details of this one.

« Taking A Bone Stock Jeep Up An Insane Rock Climb