Here in America, the burnout, while definitely appreciated, is usually nothing more ...

Here in America, the burnout, while definitely appreciated, is usually nothing more than a sideshow. Sure, I think that I can speak for most American gearheads when I say that we think that it’s cool. However, I don’t think that the burnout as we know it in America could ever live up to the reputation that is has gathered down in the land down under. In fact, burnouts are so integral to car culture in Australia that they have the entire events surrounding a skidpad where drivers will kill their tires to the best of their abilities. This is an event where participants will actually bring specially built vehicles to compete.

Even for those who have come to familiarize themselves with action of the skidpad, they probably would never expect something like this. Normally, competitors will bring some sort of hotrod car to the skid pad. We’ve seen some pretty extravagant creations. Some of them even feature the likes of a supercharger sticking out of the hood! This time, it isn’t any sort of car that’s on tap or even a consumer vehicle. Instead, we see something much bigger.

This time, it’s a semi truck that’s getting in on the action! The truck goes by the name of “Filthy” and this thing certainly has some muscle to help compete. Under the hood is a massive powerplant. Thanks to 28-liters of custom twin turbo Cummins power, the truck is capable of belting out some major numbers. For those you want an exact reading, it’s estimated to be around 900 hp and 4000 lb-ft of torque.

When we follow along with the Ridiculous Rides feature below, we get an up close and personal view of this massive machine that is built to destroy some rubber. This beast of a machine is really the epitome of pure muscle!

Ford Pickup Flexes Muscles, Yanks 18-Wheeler Out of the Ditch 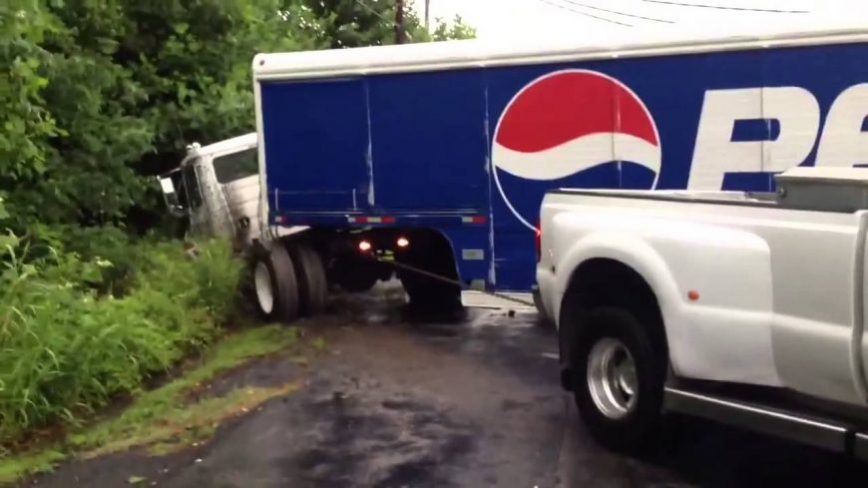