Finally a Modded Corvette ZR1 and it Holds the Bolt-On Record! 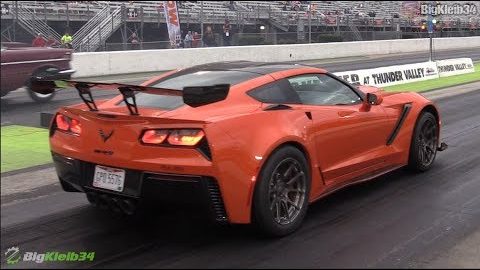 The Chevrolet Corvette as we know it has been evolving, almost too quickly. It seems like the seventh generation of Corvette came out just yesterday. When it comes to the top trim level in the C7 ZR1, it basically did come out yesterday. Okay, maybe not exactly yesterday but you get what we’re saying.

Lots of people have even taken it upon themselves to move on to the next generation already. It’s pretty easy to get excited about the Corvette that’s finally going to be mid-engined in 2020 after decades of speculation. However, we think that there is still a lot of mileage left in the C7 platform.

What it comes to the top trim package, as it turns out, the tuning software has just recently been cracked. This means that the likes of the ZR1 is finally able to be tuned. For generations, the platform has provided the most potent that the Corvette has to offer. The seventh generation is more of the same. This time, we’re getting a chance to see just what that potency is all about. Sure, the cars went quick in stock format. One even managed to crack into the high nines! However, a modified car is a whole different ballgame.

By following along with the BigKleib34 video down below, we get to see that concept come to fruition. Now, this ZR1 isn’t necessarily heavily modified. In fact, the car is strictly bolt-ons. With just a couple of pulleys, an intake, and headers, Total Performance Racing was able to pull out quite the pass. It’s pretty crazy to take a look at such a setup and see just how far performance platforms have really come. TPR has really seemed to get the car ironed out quickly as well! The most exciting part is that this is just the beginning!