As auto aficionados, we are very familiar with the concept of investing a lot into ...

As auto aficionados, we are very familiar with the concept of investing a lot into our vehicles. Heart, soul, and occasionally the wallet will find their way into our garages. Therefore, a story like this really hits us where it hurts. Even for those who aren’t too close to the world of wheels, anyone can identify with losing $200,000. It has to be quite a sinking feeling, no pun intended.

Just imagine sending some cash toward a dream car, only to get a letter in the mail stating the worst. The letter would read that the car that you’d picked out is sitting on the bottom of the ocean. All of this comes shortly before all of the anticipation has mounted and the vehicle is finally on a cargo ship and headed toward the owner.

This was exactly the case for the final group of folks who had decided that they were ready to order a Porsche GT2 RS. Via Drivetribe, 2,000 cars would end up in the sea due to a mishap with a cargo ship. The cars would include the final run of the GT2 RS and “Audi Brazil reportedly confirmed that the ship was carrying A3, A5, Q7, RS4, and RS5 models.”

Digging a little bit deeper, Maritime Bulletin would confirm that the cargo ship, “Grande America“ would catch on fire before sinking. The exact cause is still unknown. From their website, we learn that “salvors were trying to dose fire with a lot of water, but yet, hardly enough to capsize the ship. Most probably, water ingress developed, through burned through platings, or damaged valves.”

In reaction to the news, Porsche has said that they are going to gear up again for production. The model that was slated to never see orders again after February of this year. Porsche customers should be happy to know that it seems like the company is going above and beyond. They’re really going through great lengths to correct the mishap. It would probably be cheaper to just refund the customers but that wouldn’t do. We definitely have to give them a pat on the back for that.

No injuries were reported with the incident.

The Widest Ship in The World 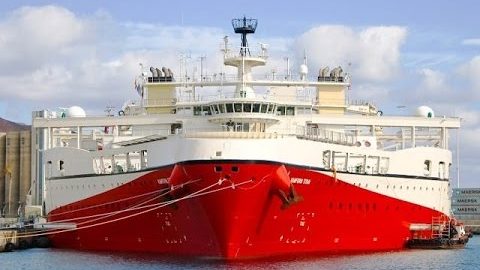