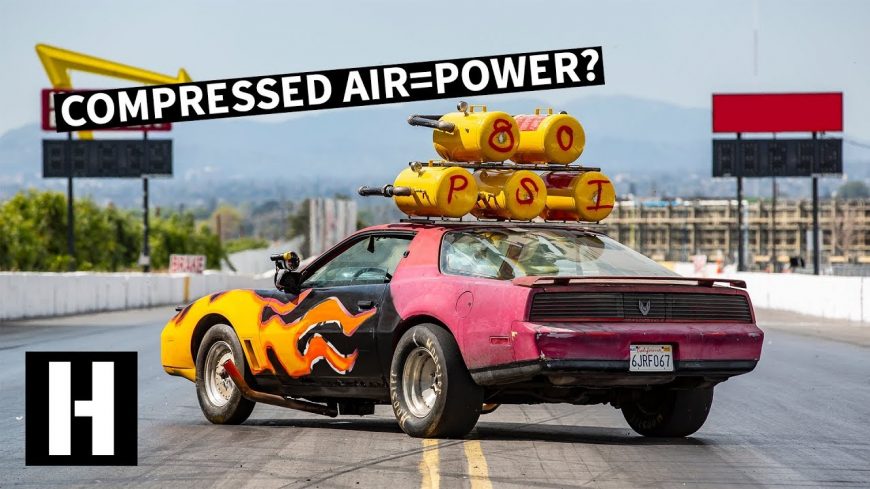 The guys started out by strapping fans to the engine (no literally, like blowing air toward the carburetor) to see if they made the car any faster or more powerful on the dyno. They got some positive results with the big fans, but they weren’t moving enough air to really pressurize the intake and make much more than a few extra horsepower.

Today, they have a plan to remedy that, using a stack of air tanks mated to the car’s carburetor to literally cram air into the engine with the opening of a valve. If you think about it, this is basically what turbochargers do, they just use compressors to convert the energy in the exhaust to force feed air into the engine instead of using air tanks. Well, sort of, anyway.

We start out with seeing how the car runs on motor, making a dyno pull of 219 horsepower and a drag strip run of 9.2 seconds. After the baseline numbers, the car is then strapped back onto the dyno and pull again, this time with the tanks being opened. Shockingly, the car made over 100 more horsepower with the compressed air, proving all of the guys had grossly underestimated the effectiveness of this system.

Unfortunately, the dyno pull toasted the transmission, so the car didn’t pick up any over the baseline pull, but the point of the day was well proven when the car cranked out 323 horsepower on the dyno.

The guys will be back, probably next week, hopefully with a repaired transmission if needed, and maybe some more air tanks to see what this thing will do on the track.