As a regular functioning member of society, I was completely unaware that there is a ...

As a regular functioning member of society, I was completely unaware that there is a subset of our culture that apparently is too self-absorbed that they think their trip to Walmart to buy Twinkies ranks above an emergency situation involving an ambulance.

Ever since most of us were young, we were taught that when we have red flashing lights behind us on a firetruck or ambulance, we should do everything that we can to get out of the way. Sometimes, this means hitting the brakes and moving to the side of the road and other times perhaps it means just making sure that we don’t end up in the path of the speeding emergency response vehicle.

However, there are folks who apparently don’t act too kind when it comes time to get out of the way of an ambulance. When a couple of emergency responders spoke with ABC back in 2016, there had been a running total of over 31,000 accidents that happened in the past decade involving a fire vehicle.

The advice offered up by these particular first responders is to stay calm and pull over and stop so that an emergency vehicle can go around. Just when we thought that this wasn’t rocket science and something that everybody with half of a brain could manage to do, we find ourselves shocked to hear that some fail to abide by these simple rules. There are even folks who find it necessary to flip the bird to emergency responders.

The first responders continue that, in situations like these, sometimes, it can just be a matter of seconds that could determine a life-saving situation or somebody passing away. Naturally, having to lose lives because of an extended stay behind someone who doesn’t know how to pull to the shoulder has to be incredibly frustrating and disheartening.

The tiller man on this firetruck is a straight up boss! 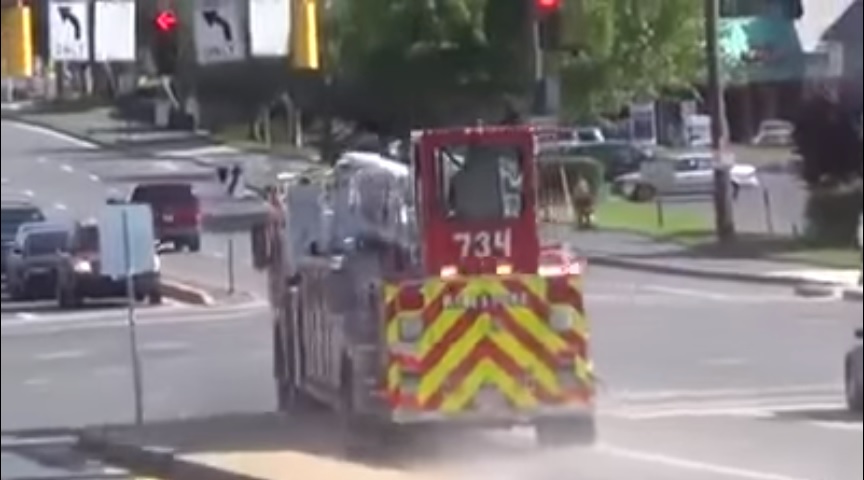