When you’re out and about, beating on your stuff sometimes you do a little bit ...

When you’re out and about, beating on your stuff sometimes you do a little bit of damage to it. Don’t fear, the wear and tear is normal and to be expected. Sometimes it happens when you aren’t even beating on your ride at all and is just a byproduct of driving it.

This time, we look at a really common phenomenon in an exhaust dent. Most will argue that they don’t really affect performance but the fact that they’re unsightly is something that most can agree upon. However, dents are something that you really couldn’t do too much about without making it a major project – until now.

In this video, we are shown a method that uses a pressure washer and a couple of stoppers to put some extreme pressure on the inside walls of this exhaust and push the big dent right on out with ease.

Check out the demonstration below tell us what you think of this method of getting rid of that unsightly exhaust dent in this two-stroke piece of hardware.

How TO Remove Large Dents on your Chevy Truck! 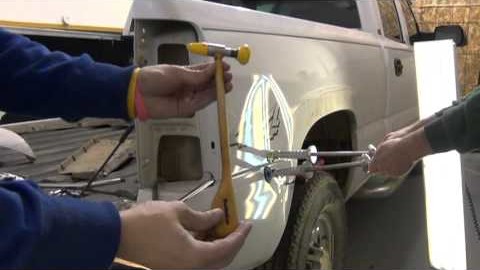