Posted by: Jeremy Patterson on September 9, 2017 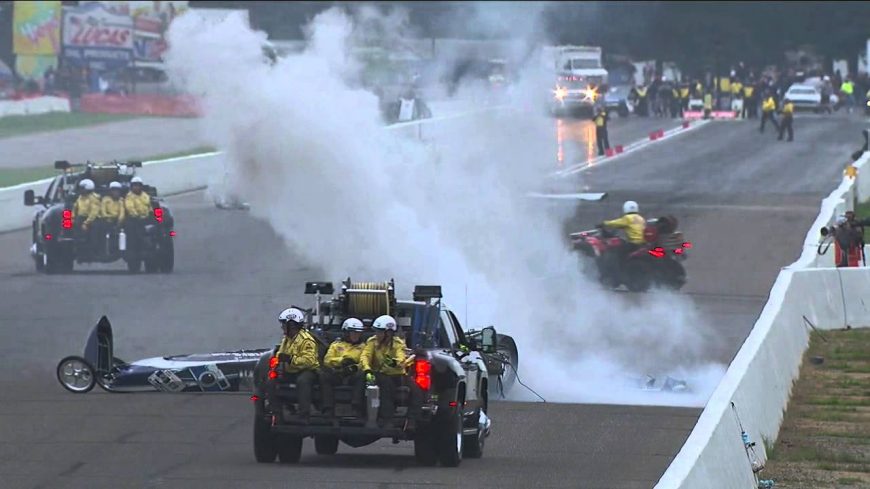 Capable of elapsed times in the deep six-second range and speeds in excess of 230 MPH, Top Dragster is one of the quickest classes in sportsman drag racing. With naturally aspirated engines, nitrous combinations, and blown and turbo cars too, the class features a little bit of everything strapped between the frame rails of 230″+ dragsters. The cars run on a staggered, or handicap, start based on their dial in, an elapsed time the driver predicts his car will run on a given pass.

While the cars do have to run as quick as they can to qualify, as only the quickest sixteen or thirty-two cars make the field on race day, the name of the game is consistency. The driver has to be able to accurately predict the car’s performance or there’s almost no chance of him going deep into eliminations. With that being the case, the cars are generally pretty well behaved as they traverse the quarter mile unless there are external forces at play, such as a little moisture on the track. At that point, the game changes drastically, as the huge slicks on the back of these cars do not do well at all on anything but a prepped racing surface.

However, back in 2014, during a drizzly mess of a race at Brainerd International Raceway, a pair of dragsters left the starting line, the drivers, and crew on the starting line completely unaware that there was a slight sprinkle near the top end of the track. As the cars passed half track, the dragster in the right lane, driven by Monte Green, loses traction and begins to skate around. It looks like Monte has it gathered up, but the car takes a hard turn into the wall, rolling several times before skidding to a halt in the shutdown area. In the other lane, just a split second later, the other car, driven by Don Kritzky, tries to drive around the crashing dragster of Green and he loses traction as well, slamming hard into the wall in Green’s lane past the finish line. As Greens car grinds to a halt, his nitrous bottle is ripped from the car and spins around the shutdown area before finally coming to rest. Kritzky’s car bursts into flames, but the NHRA Safety Safari is on the job and knocks down the flames within seconds.

Both drivers survived the incident, Green with only minor injuries, while Kritzky had to be airlifted to a nearby hospital with a fractured pelvis. This just shows how quickly things can get out of hand at 200+ MPH!