Flying UTV Ends In Horrible Crash… Straight Into a Building! 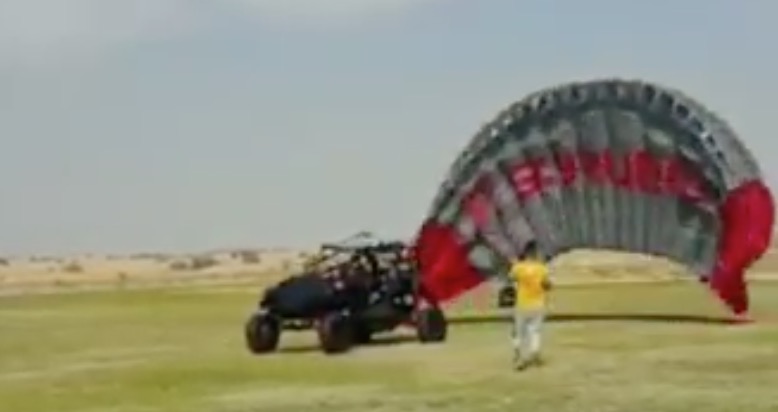 For some of us, we are constantly in search of the ultimate thrill. There’s nothing that can even come close to being able to get your blood pumping in such a way that you can’t help but want more. Such thrills can come from all sorts of motorsports or maybe something like skydiving, but this person decided to tie both of those concepts into one. Without too much information to go off of here, it looks like somebody attempted to take a side-by-side utility vehicle and make it a flying machine so that they could attempt to do what looks like a modified version of hang gliding. However, the results weren’t exactly as this person was anticipating.

When the UTV was accompanied by a parachute of sorts, it looks like the idea here was to be able to have a machine that could drive on the ground but eventually be lifted into the air. Just as these folks were hoping, the vehicle did manage to get lifted in the air but it would appear as if, when they were traveling through the air, they couldn’t get the right amount of lift at the right time as they needed to be just a little bit higher in order to clear a building that was in the distance and coming up fast.

We don’t necessarily need to spell out for you how this one’s going to go as the quick moving vehicle was approaching the side of the building in a hurry. Eventually, the collision would be made and the side-by-side would fall straight from the sky in a hurry. Allegedly, both people did survive the accident with only minor injuries which is pretty miraculous considering the fact that it looks like they fell from a pretty high plateau. Hey, at least they have a story to tell now!

« No Shirt & No Helmet, All While Doing Wild Tricks On His Harley