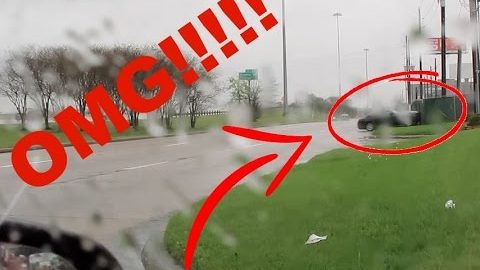 I think that somebody needs to do a little bit of a research experiment to find out exactly why such a high proportion of Ford Mustang drivers tend to crash their cars into anything and everything. Sure, it was a joke that was starting to get old and beginning to die off but, for some reason, just as the meme stop flowing, more and more videos of people doing some major crash and burn behind the wheel of their Stangs continue to surface.

This time, we catch up with somebody who was just leaving the dealer in a V6 Mustang and they attempt to do a little bit of showing off as they punch the gas pulling out of the lot. However, a slippery and wet surface doesn’t really allow for much control and, well, I think you could see where this one is going from here. We watch on as the Mustang plows straight into a fence right next to a Lamborghini dealer in a very cringeworthy manner.

I guess it doesn’t matter if it’s a V6 or a V8, these things just continue to get sideways and beyond the driver’s control before plowing into whatever is in their path. When will this madness of Mustangs pulling out of parking lots end? When can the general public feel safe to return to a car show again? These are the hard questions that we need answers to!