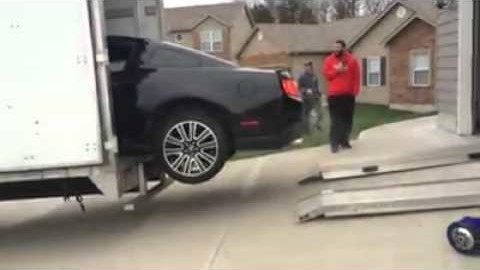 When it comes to packing and shipping, not everybody is the best on Earth, but sometimes we run into people who fail especially hard at it.

This time, we catch up with a couple of folks attempting to stuff a Ford Mustang GT in the back of a box truck when all of a sudden the situation goes bad!

When half of the car is in the truck, with the back wheels resting on the ramps, the ramps slide out, causing the car’s frame rails to slam to the bottom of the truck.

Check out the video below that shows the moving fail in action. Something tells us that they will be paying somebody the next time that they want to move an expensive item like this