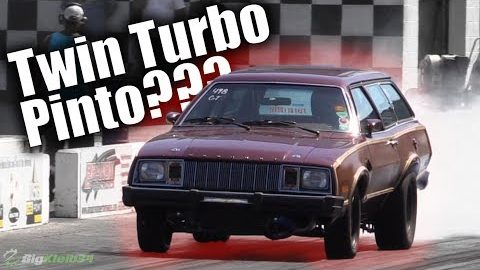 Sure, when you’re tackling going fast, the easiest way to do it is probably something that lots of other people have done. After all, there is a reason why you see a ton of Ford Mustang Fox Bodies running around out there. If something is proven to work over and over again, that gives people a really good reason to go out and get it for themselves. There is a lot less guess work and that means spending less money on trial and error. However, when someone is in the pursuit of being different, we get to see just where peoples’ imaginations can go and it’s in all sorts of different vehicles that are made to go fast, regardless of if they were speedy to start with or not.

In this one, we take a journey out to Holly LS Fest as a Ford Pinto is put on display. Well, technically, this is the Mercury rendition that comes in the form of a Bobcat wagon, but you get the point. Now, back in the day, this might have been one of the cheapest cars that money could possibly buy and totally not something that would be considered desirable by any stretch of the imagination, when this owner had one in good condition, he decided that he would take out the disappointing power plant under the hood and replace it with something a little bit more modern and with just a little touch more horsepower. At this point, I think you can see where this one is going.

If you follow along down the BigKleib34 video below, you’ll learn all about the setup that puts a 6.0L LS engine to the task of going fast when paired with a couple of goodies inside like a camshaft and a set of more aggressive valve springs. In addition, a set of turbos pushing air through the engine can really get this old-school Ford in motion. When they really open this thing up, the Pinto goes from something that you would pass on the highway and not even look twice at to a machine that could slay some of the quickest cars rolling off of the assembly line today. Be sure to tell us what you think of this one-of-a-kind machine that really pops out there on the strip!

« Caught on Camera – Cyclist Runs into Angry Bear While Speeding Down a Trail, Bails into Bushes