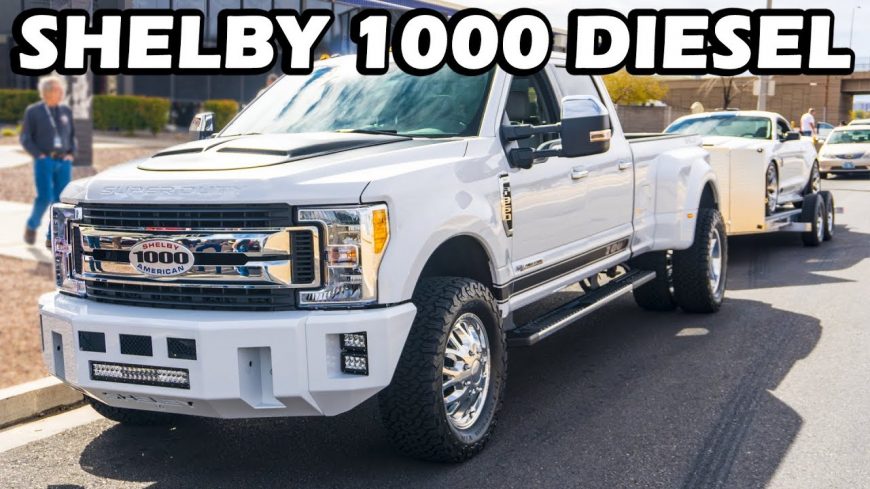 Today in potentially viral trucks that have kind of flew under the radar, we take a look at the Shelby 1000 diesel pickup truck. We were excited to start digging into this thing to bring our readers a treat. However, after some looking, we were left with more questions than answers. Perhaps someone hit the backspace key a couple of times here. It almost seems like the truck disappeared without a trace.

After the platform gained a bit of attention on YouTube and in the automotive media space, it seems to have disappeared. In fact, there hasn’t been much chatter about it since the unveiling. It seems to have been debuted and forgotten about, all in one swipe. It almost seems as if the concept fell off the face of the Earth.

Watching the truck simultaneously doing a burnout with the car it was pulling on a trailer was pretty cool. That might’ve been the extent of the life of the Shelby 1000, though.

So, what is this truck all about? The idea was to deliver a slightly beefier version of the Ford F-250 and F-350. With minor modification, the truck would produce 1000 lb-ft of torque while remaining completely emissions compliant. Albeit just a 65 lb-ft increase, four digits is something worth bragging about. At least that’s what the team behind this one seemed to think.

The planned 250 units expected per year would consist mainly of appearance add-ons, or so it would seem. The investment of $22,595 for regular trucks and $24,995 for dually trucks would add striping, badging, a custom hood, HD bumpers and a “Premium interior” featuring a carbon fiber appearance package.

In fact, what would appear to be an older version of the marketing that we were able to locate on the truck had these options selling for $33,999 and $39,999, respectively.

It seems like the lack of information would lead to the idea that few were interested. This is a bit of an assumption but seems like a safe one. We can’t necessarily say that we’re shocked at the lack of interest in what ultimately ended up being over $20,000 for cold air intake and an appearance package.

In turn, the 2020 Powerstroke equipped Ford pickups to offer 1,050 lb-ft right out of the box. Perhaps that put a bit of a damper on the marketing behind the advertised 1000 lb-ft from Shelby.